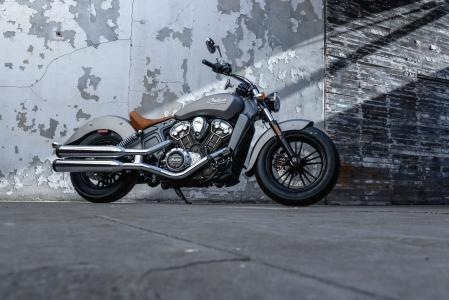 Visitors to Melbourne’s Moto Expo will be the first in the country to see the all-new Indian Scout with the manufacturer confirming its Australian reveal alongside the all-new Roadmaster at the event on 28-30 November at the Melbourne Showgrounds.

“We are extremely excited about the return of the legendary Scout, not least because it will be the first truly new Scout in more than seven decades – it is a contemporary yet classic interpretation of one of motorcycling’s most coveted and famous bikes, known for its feats as the ‘world’s fastest Indian’ and on the ‘Wall of Death’,” Peter Harvey – Indian Motorcycle Australia Country Manager said.

With high horsepower levels, exceptional comfort and superior handling, the all-new Scout is designed to appeal to riders of varying sizes and experience levels.

Other new Indian bikes that will be on show will be the Roadmaster tourer and two-tone version of the perennial favourite, the Indian Chief, both with strong ties to Indian’s history as America’s first motorcycle company.

“The all-new Roadmaster will raise the bar in luxury motorcycle touring with high levels of comfort and convenience alongside features that recall the original bikes from the 1940s and 1950s,” Peter Harvey – Indian Motorcycle Australia Country Manager said.

“As our new flagship luxury touring bike, Roadmaster comes with an extensive list of standard premium features – customers will no doubt be impressed with the quality, craftsmanship and performance that allow two passengers to comfortably ride all day,” he concluded.

On display at Moto Expo will be the full colour range of the new Indian Scout that will be on sale for a Recommended Ride Away price of $17,995. The Scout will be available in thunder black, Indian Motorcycle red, silver smoke and thunder black smoke.

Australian fans of Indian will be able to see the full 2015 range at Moto Expo on November 28-30 at the Melbourne Showgrounds – all Indian Motorcycles are back by the company’s 2-year, unlimited kilometre warranty.

To see the full range of Indian motorcycles, parts and accessories, or to book a test ride, please go to www.indianmotorcycle.com.au

Cruise In Style This Summer Knowing Suzuki Has You Covered