After 32 years Murray Sayle is retiring from Kawasaki Motors Australia.

Murray officially retires on the 30th of June 2019 with his last day in the Kawasaki office on Wednesday 24th April 2019.

Murray has a well-known passion for the Kawasaki brand. The green blood infiltrated Murray’s system in-full once he stepped on-board the H2R 750cc 3-cyclinder race bike for Ron Toombs in 1974.

“My proudest racing moment was winning the Australian Road Race Championship in 1978, but I still regret not winning the New Zealand Marlboro 250 series in 1977-78” – Murray Sayle.

Murray’s recent role at Kawasaki has been with the Marketing Department.

Across his Kawasaki career, Murray has made significant contributions to the in-house systems, enhanced the knowledge of co-workers and ensured the Kawasaki Dealers had support in place to grow the Kawasaki brand.

Murray brought his understanding of racing, brand belief and desire to win into Kawasaki every day.

“It has been a fantastic journey here at Kawasaki over the past 32 years. I have worked with our great staff and dealers and made some life-long friends.

I have been very lucky to have worked with our Japanese head office staff and visited Japan approximately 20 times. I have test ridden new products at the Auto Polis Race Course (Kyushu, Japan) the JARI Test track (Chiba, Japan) and the SPA Naoiri Race Track (Japan).

“Kawasaki is built on people like Murray Sayle; people with passion, knowledge and integrity.

On behalf of Kawasaki Motors Australia and Kawasaki Heavy Industries, I would like to express our deep appreciation for his great contribution to Kawasaki.

I have always enjoyed talking with Murray about racing and hope we can continue to have these chats after his retirement.”

The knowledge, history, stories and dry humour will be missed.  Kawasaki Motors Australia says “Thank You” to Murray Sayle for the years of work, industry involvement, ongoing passion for motorcycling and promotion of the Kawasaki range of products.

We here at Australian Motorcyclist wish Murray all the best for the future, he is a huge loss for Kawasaki as his knowledge of Kawasaki (the brand) is irreplaceable. 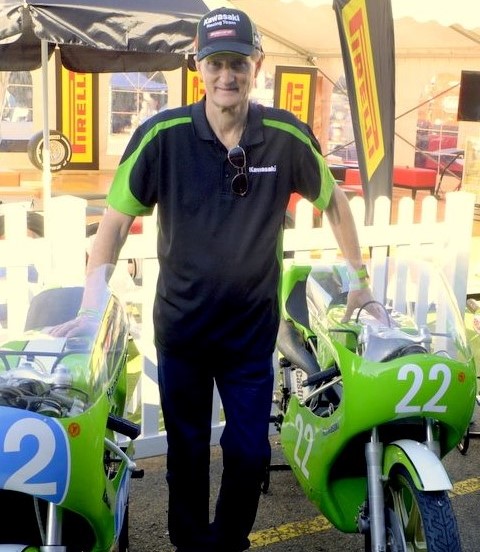