Ducati 2020 Streetfighter V4 has been officially revealed for the first time.

Essentially a stripped down Panigale V4, sharing the engine and electronics package, together with an aggressive design with two wings on either side of the bike to no doubt help keep that front wheel down!

The Streetfighter V4 will be available in two versions, the base Streetfighter V4 and the Streetfighter V4 S. As with the Panigale V4 and V4 S, the higher-spec naked gets Öhlins electronic suspension, Öhlins steering damper, and lightweight Marchesini wheels. Both versions are powered by the 1103cc Desmosedici Stradale engine from the V4 Panigale. In standard trim, the unit produces 153kW (208hp) at 12,750 rpm, and 123Nm at 11,500 rpm, meaning engine performance is in line with the standard V4 Panigale. As expected, Ducati has tweaked the fuel and throttle maps for the new bike, delivering rear wheel torque 10% up on the Panigale. For those that feel that 153kW simply isn’t enough, Ducati offers the option to fit the race-kit Akrapovic exhaust system which will increase power to 164kW (220hp) and 130Nm.

The must-have for any high-performance motorcycle this year are winglets. It has two sets of what Ducati are calling biplane wings, mounted on each side of the bike’s side panels. Ducati claim that these wings can generate 28kg of downforce at 270km/h. The wings are also credited with helping to cool the engine. 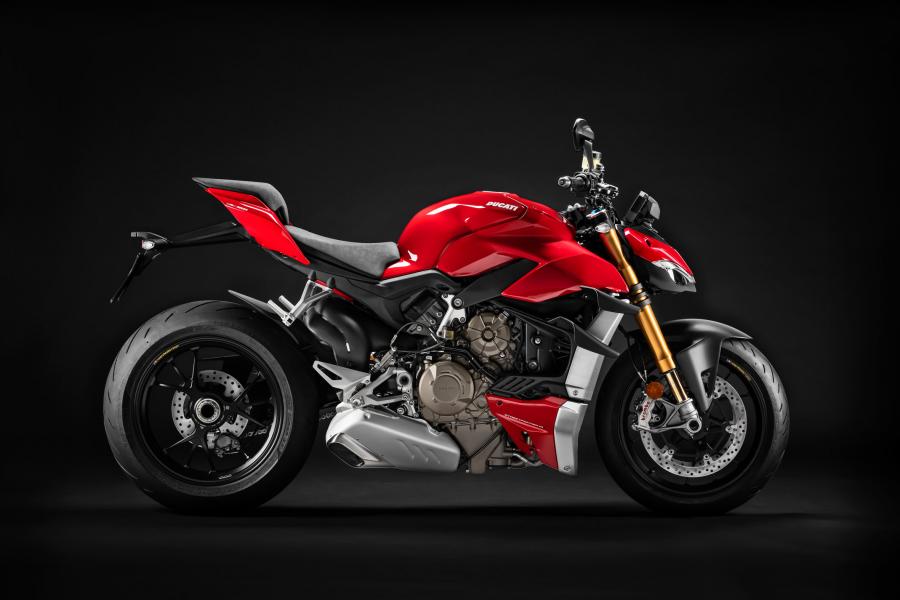