Kawasaki are bringing out the big guns for the Australasian Superbike Championship finale at Sydney Motorsport Park this weekend. 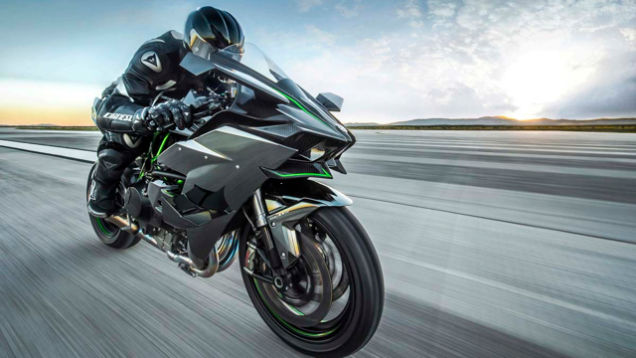 In addition to an outstanding line-up of Kawasaki racers competing, the brand is pleased to announce that the new super-charged Ninja H2R will be ridden for exhibition by Murray Sayle plus Kawasaki racing identity Robbie Phillis will be competing on board the Kawasaki Motors Finance (KMF) Ninja 300 in the Kawasaki Insurances FX300 Ninja Cup.

40 years since he raced full-time on board the Kawasaki Ninja H2R, Australian racing identity and Kawasaki employee Murray Sayle will again take to the track onboard the iconic model. However this time it will be for exhibition purposes and the Ninja H2R has had a few upgrades since 1974. Sayle will be the first inAustralia to ride the exciting new supercharged 2015 model Ninja H2R, a model that has demanded the motorcycling world’s attention, and he is looking forward to the opportunity.

Murray Sayle say’s, “I remember when I first rode the H2R at Lakeside in Queensland in 1974. It was fitted with treaded tyres and it was wheel spinning in a straight line and would jump forward when the throttle was closed as the rear tyre regained grip. It was certainly a challenging ride but damn was it was fast. To now have the opportunity to ride this amazing new 2015 model Ninja H2R…..with a supercharger, for the first time in Australia is a real honour. The many facets of Kawasaki Heavy Industries engineering and development that have gone into this model is nothing short of amazing and I can’t wait for the chance to ride it.”

Murray Sayle will be riding the 2015 Ninja H2R around the Sydney Motorsport Park circuit on Sunday afternoon.

Robbie Phillis say’s, “I feel like I’ve got a big target on my back because I’m racing against all these young blokes who are my son’s mates and I don’t think I’ll be as fast as them which will be hard because I go into every race to win. I haven’t had a chance to ride the Ninja 300 yet. The last time I rode a similar bike to the Ninja 300 was a KR250 at Calder in 1984 so its been a little while but I know Eastern Creek, I’ve had the lap record there a few times so it should be ok”.

Of course there will also be a host of Kawasaki supported riders competing at Eastern Creek including defending Superbike Champion, Matt Walters, who is looking to turn a tough year around after finding a much more agreeable set-up for his Ninja ZX-10R heading into the final round. Sean Condon, also competing in the Superbike class will be carrying a load of confidence with him this weekend after winning the Phillip Island Championship this year. Kawasaki dealership, Crazy Dogs Kawasaki supported rider Mike Jones will be looking for a strong finish to a successful year on his Ninja ZX-10R and Sophie Lovett will be crowned the Kawasaki Insurances FX300 Ninja Cup Women’s champion after a highly successful year of racing including outright podiums in the whole class.

The action takes place this weekend at Sydney Motorsport Park.