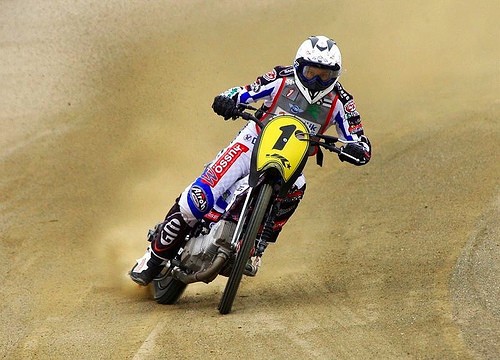 Kylmakorpi, who is one of the world’s most successful long track racers, also boasts an illustrious international speedway career. The 35 year old, led the Finnish national team in the 2007 Speedway World Cup and is a multiple medallist of Team Championships in Sweden, Great Britain, Poland and Denmark. He added longtrack to his racing program in 2000.

As well as the Motul Pirelli Troy Bayliss Classic Kylmakorpi will also contest the Australian Motorcycle Finance Troy Bayliss Invitational GP and a soon to be announced event, planned for Brisbane in March 2016.

“I am very excited to be invited to participate in the Troy Bayliss Classic,” Kylmakorpi said. “I started racing flat track last year and I really enjoyed it.

“It is a crucial part of my season preparations. Flat Track is the closest motorsport discipline to speedway, so I benefit from it a lot. Last year I took part in one race – Superprestigio in Barcelona.

“Racing in events organised by Troy Bayliss is a great honour and I would not miss such a chance. I have been to Australia only once before, when I was a teenager, it will be a great adventure to come back and participate in such a worldwide known event.

“Even though flat track is not my main sport, I am a racer and I always aim for victory,” Kylmakorpi added.

“It is great Joonas is coming over to Australia to compete in the three Troy Bayliss Events,” said Crump. “I mentioned to Troy to catch up with him at last year’s Superprestigio and I’m glad it has worked out.

“Joonas and I competed against each other starting in the late 1990’s and we were also on the same team in Poland. He has really been coming on strong over the last five years especially in the long and grass track fields.

“Hopefully this will help promote more international speedway riders to come to Australia and compete in events such as the Classic and Invitational GP.

“I look forward to catching up with Joonas at the Taree, Phillip Island and Brisbane events,” Crump added.

The Motul Pirelli Troy Bayliss Classic presented by InsureMyRide and Garden Master will be held at Taree Motorcycle Club on Saturday 16 January 2016.