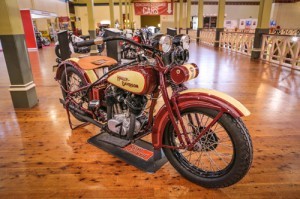 Motorclassica, now in its fifth year, is an internationally-recognised event for unique, collectible and historically significant cars and motorcycles, and over its short life has become firmly established as an annual mecca for Australia’s automotive enthusiasts.

The world heritage-listed halls of the Royal Exhibition Building and the adjacent grounds will host more than 500 cars and motorcycles over the course of the three days of Motorclassica, as well as automotive memorabilia, artwork, models and other collectibles.

Motorclassica will celebrate 100 years of the iconic Italian marque Maserati and 50 years of Ford’s most famous model, the Mustang, with special displays in tribute, each featuring iconic models from the past.

In doing so he became the first and only person in history to do ‘the double’ in the same year.
In recognition, Motorclassica will pay tribute to the iconic British adventurer with both a special display of Bluebird artefacts and memorabilia dubbed ’50 years of Speed presented by Longines’ and a visit from Donald Campbell’s daughter, Gina Campbell.

Gina Campbell is Motorclassica’s 2014 Ambassador and will appear on centre stage in the Great Hall sharing her memories of her father with visitors, stories from her own World Water Speed Records and participating in the event’s many activities.

Another highlight of Motorclassica 2014 will be its tribute to the ‘Australian Specials’ that once dominated local racetracks in the early years of the sport here.

Motorclassica has assembled an amazing and eclectic collection of home-built vehicles with all sorts of weird and wonderful mechanical configurations, built back in the early days when there was more enthusiasm than money.

Motorclassica attracted a record crowd in 2013 and is expecting to better that again this year, when over 150 cars and motorcycles in 18 judged classes will compete in the Australian International Concours d’Elegance.

Motorclassica will officially kick off on Thursday 23 October with Tour Classica, when 80 cars and motorcycles will leave Melbourne Zoo at 9.30am for a parade through the streets to make a grand entrance at the Royal Exhibition Building from 10.30am.

Another highlight of Motorclassica this year will be the annual auction.

Conducted by Theodore Bruce, Australia’s oldest auction house, the Motorclassica auction will see just 30 hand-selected vehicles and a selection of automotive memorabilia from the world-famous collection of West Australian Peter Briggs going under the hammer.

Additional information on the 2014 Motorclassica, to be held at Melbournes Royal Exhibition Building from October 24-26, is available at www.motorclassica.com.au.

Honda Brings All The Action To 2014 MotoGP