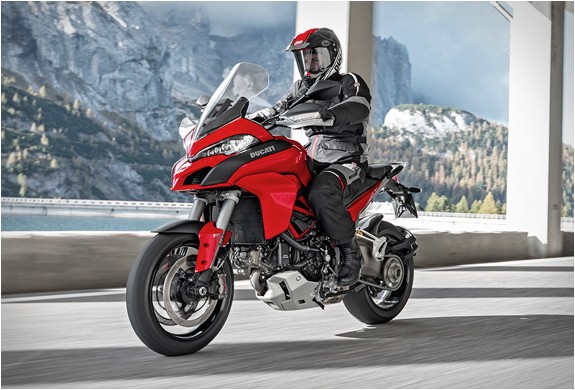 Also new for 2015 is the opportunity to further refine your Multistrada model with one or even multiple Accessory Packs. Perfectly matched to the 4-bikes-in-one concept, each accessory pack is designed to further enhance and extend the rider’s requirements and enjoyment of their Multistrada;

The Urban Pack keeps Multistrada sleek for around town with rear top case and tank bag with lock and USB power hub for charging. RRP $1,098

The first customer pre-ordered Multistradas are set to arrive in Australia mid-May with availability for test rides at Authorised Ducati Dealerships later in the month.

As soon as it was launched back in 2010, the Multistrada 1200 revolutionised the motorcycling world by offering, for the very first time, nothing less than four-bikes-in-one: from super sport to long-distance tourer, from everyday runabout to enduro. Now, Ducati’s technological expertise has produced a new generation of Multistradas, bikes featuring the latest Ducati Testastretta DVT (Desmodromic Variable Timing) engine and a state-of-the-art technological package that sets a whole new standard in its product segment. The new Multistrada 1200 DVT is the “multibike” par excellence, with cutting-edge technology making it far more than just the 4-bikes-in-1 offered by its Riding Modes.

In what is a first for the motorcycle industry, the DVT engine features a variable valve timing system with independent control of both the intake and exhaust camshafts. This optimises engine performance throughout the power range in all riding conditions, thus ensuring maximum power at high rpm, fluid delivery, punchy low-rpm torque and low fuel consumption in full compliance with the latest Euro 4 regulations.

The Multistrada 1200 also sets a new electronics benchmark thanks to the Inertial Measurement Unit (IMU) which dynamically measures roll, yaw and pitch angles as well as the rate of their change; with this information, the IMU enhances both performance and safety. For example, the presence of the IMU enables the ABS to include a Cornering system capable of controlling braking even on bends where wheel lock could otherwise cause skidding. On the Multistrada 1200 S it also enables control the Ducati Cornering Lights (DCL) in its full LED headlamp. Moreover, the IMU has allowed the introduction of Ducati Wheelie Control (DWC): this detects, corrects and controls front wheel lift to ensure maximum acceleration in complete safety.

All models now feature Electronic Cruise Control, which the rider can set as desired using controls incorporated in the switchgear on the left handlebar. On the S version a Bluetooth module is included as standard: this activates the Ducati Multimedia System and can connect the bike to a smartphone for user-friendly control of basic functions such as receiving incoming calls, notification of text messages, GPS instructions or playing music via the handlebar controls and on-dash info. Thanks to an iOS/Android app, the Bluetooth connection lets riders use bike data to activate other functions which enhance, extend or let them share their everyday riding or touring experiences; the app even allows interaction with the ducati.com website and social networks.

All prices are RRP and include GST, but excludes Dealer and Government charges. Prices are subject to change without notice and are applicable as of 28.4.15.