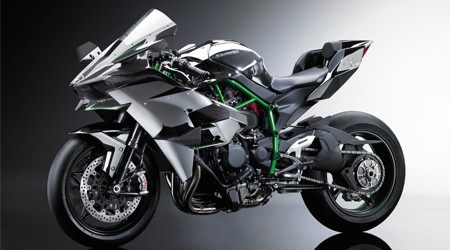 When Kawasaki conceived the Ninja H2R, the driving development concept was to offer the kind of acceleration no rider had experienced before. That a motorcycle be “Fun to Ride” is one of Kawasaki’s guiding principles. While there are many ways for a motorcycle to be enjoyed, it was felt that having strong acceleration was a major factor in delivering riding exhilaration.

Powering the Ninja H2R is a supercharged engine with an output in the vicinity of 300 PS.
Carbon Fibre upper and lower wings for stability at ultra high speeds
Designed in conjunction with Kawasaki Aerospace Company
Proudly displays the Kawasaki River Mark on the front of the Ninja H2R

When it came to naming this model, using “Ninja” – a name synonymous with Kawasaki performance and shared with many legendary models over the years – was an obvious choice. the Ninja H2R is also named for another epoch-making model, whose 2-stroke 748.2 cm3 Triple gave it an intense acceleration that made a sensation around the world: the 750SS Mach IV, also known as the “H2”.

The Ultimate Fun This Christmas With Honda