MV Agusta motorcycles have always been the most loved in the F1 paddock. Over the years, champions like Berger, Irvine, Montoya and Damon Hill have all been clients and friends of the Schiranna manufacturer who even dedicated two special series F4 models to Ayrton Senna: the F4 750 in 2002 and the F4 1000 in 2006. This tale now repeats itself with the three times world champion, Lewis Hamilton.

Lewis Hamilton and the Dragster RR have much in common. They are both radical and extreme in regards style, obsessive about detail and are exuberant, bold and fear no rivals. They share the same winning nature and desire for the absolute best. Together, they form an irresistible force which, summed up in just a few letters, will become legendary: Dragster RR LH 44.

The intrinsic value of a hand‐built Dragster RR featuring special parts and finishes will now be even higher as a collector’s item. Never before has an F1 champion participated directly in the creation of a new motorbike, and the fact that it was an MV Agusta speaks volumes.

Lewis Hamilton was in very close contact with Castiglioni Research Centre for several months as they chose details, finishes and very exclusive accessories. The graphics are a good example: the pearl white colour scheme and panther logo are taken from his helmet, while 44 is his race number, which decorates the front and side of the bike, not to mention the ignition key.

Lewis said of the project; “I have a huge passion for bikes so the opportunity to work with MV Agusta on my own Dragster RR LH Limited Edition has been a great experience. I have really enjoyed the creative design process with the MV Agusta team, it looks amazing; really aggressive with fantastic attention to detail, I am truly proud of the result. I love riding this bike, it is so much fun, I hope its new owners love it as much as I do.”

Speaking about the collaboration MVA’s CEO Giovanni Castiglioni said; “We’re proud to have  created a bike together with Lewis Hamilton. I think this is great news for us and for those  around the world who love MV Agusta.”

The bike features countless examples of true craftsmanship, ranging from the Alcantara quilt pattern saddle to numerous parts made from Ergal (brake lever, handlebars, fuel filler cap, brake pump cover) with a special anodised red finish on the logos, frame, footpegs and spectacular spoked wheels. Other features of the Dragster RR LH44 include adjustable clip‐on bars finished in matt black like the side stand, frame and footpeg plates.

  Like an Formula One car, most of the bodywork on the LH44 is made from carbon fibre with a matt 3K finish. This highly expensive, exotic material was used to make the front and rear mudguards, the screen, air box and side covers, exhaust heat shields, gear box and swingarm covers and sprocket guard. The similarities with Formula One extend to the front of the bike, which is dominated by the race number 44 (incorporated into the limited edition ID plate on the 244 bikes) as well as the panther and Hamilton’s signature.

The Dragster RR is propelled by the famous three‐cylinder 800cc engine with counter‐rotating crankshaft which puts out 140 HP at 13,100 rpm, The engine derives directly from the WSS F3. Weighing just 52 kg, with much less bulk than an average engine of this size, this engine is one of the most evolved three‐cylinder units in the world. Fed by six electronically controlled injectors, the power output is linear at low revs and explosive at high revs. The onslaught of power stops only when the rev limiter kicks in at 13,200 rpm. The bike’s mechanical sophistication is further underlined by its extractable gearbox with electronic quick‐shift command, its slipper clutch and its MVICS engine management system which includes Full Ride by Wire throttle control with multi‐map and integrated traction control with 8 settings.

The frame of the Dragster RR is ultra‐compact with a wheelbase of just 1380 mm and a 95 mm trail. The ALS steel tubular trellis frame is strengthened by light aluminium alloy plates in the area behind the swingarm pivot point. The stanchions on the inverted 43mm aluminium Marzocchi forks have been DLC (Diamond Like Carbon) treated and are simply spectacular with their red anodised finish. Wheel travel is 125 mm, the same as at the rear, where a Sachs damper controls the single‐sided swingarm. The Brembo brakes include two front four‐caliper 320mm floating discs, with a two‐caliper 220mm disc at the rear. ABS rounds off the braking system and ensures safety on slippery or wet surfaces. The cross section of the 200/50 Pirelli Diablo Rosso rear tyre is hard to believe and highlights the spectacular spoked wheels on the Dragster RR LH44.

Captivating as it is rare, owners can now ride a Formula One Champion’s own creation and enjoy what the elite sportsman finds as the next best thing to his own F1 car. 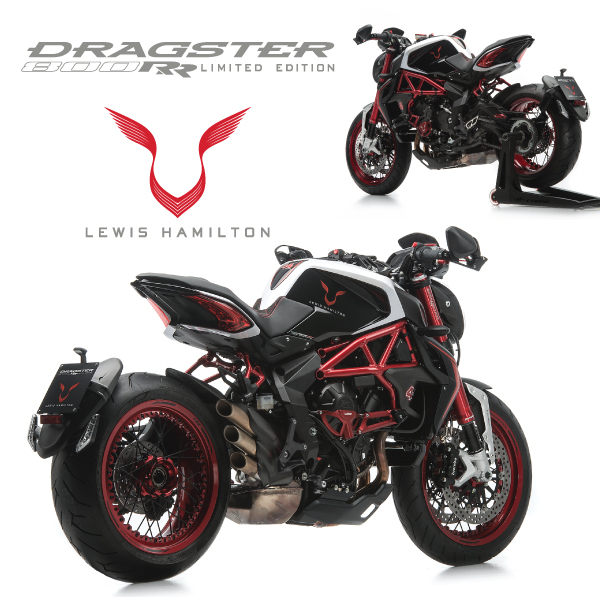