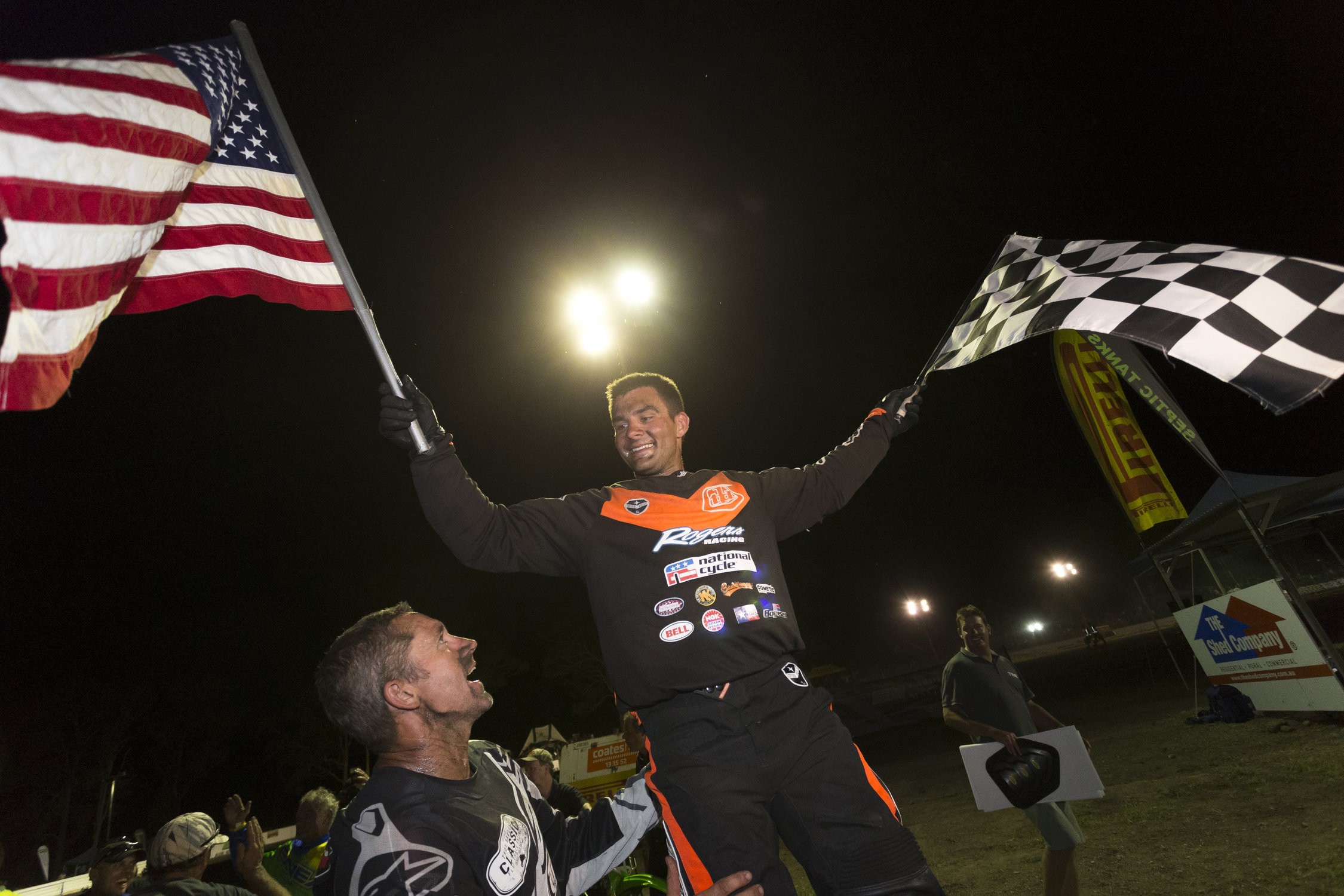 The solid crowd of over 6500 were treated to an action packed event as some of the biggest names in motorcycle racing battled bar-to-bar on the iconic oil based track.

As the sun set the event moved to the business end of the program with the Americana, Superpole and Troy Bayliss Classic running well into the night.

While none of the international riders factored in the final of the Americana, Jared Mees spearheaded an American one-two finish in the 21-lap Troy Bayliss Classic.

“I didn’t do well in the heat races, I fell then chased setup all day,” Mees explained. “In the Americana I did well in the first round then got a flat tyre. I set the fastest qualifying time in Superpole and then won the main event

“It was very cool to be the first international rider to win the Troy Bayliss Classic. I had so much fun I really hope they ask me back next year,” Mees added.

Fellow American Henry Wiles is garnering quite a following in his second appearance at the annual event.

“I love this event it is incredible how much it is grown since last year,” Wiles said. “It was really good to improve on last year and get on the podium.

“I don’t know what the deal was tonight I had a little trouble getting off the gates so I made it hard for myself having to pass so many guys to get to the front.”

Early favourite Troy Herfoss emerged victorious in the elimination style Americana but crashed while battling for the lead in the 21-lap Troy Bayliss Classic.

“It was a rough one for me today we had a lot of pace but I made a mistake in the final and in the end I was beaten by a class field,” Herfoss said.

“It was great to win the Americana I had a lot of fun and the crowd really got behind it.

“This event is fantastic and it keeps getting bigger each year. The level of competition was really high and I hope I am invited back again next year,” Herfoss confinued.

“It was a fantastic event,” Bayliss said. “It really does just keep getting better and better.

“Everyone had a great time and it was awesome to see one of our international guests take out the Troy Bayliss Classic for the first time.

“As far as my own results go I was pretty happy with how I raced. It was intense out there, everyone was riding on the limit.

“I have to say a huge thanks to Taree Motorcycle Club, all of our sponsors, volunteers and the Racesafe Medical team for all their hard work over the weekend,” Bayliss added.

Troy Bayliss Events will now turn their attention to the Bayliss Scramble Teams Challenge which will be held during the opening round of the WSBK on 20-22 February at Phillip Island Island.