Records are made to be broken and this Australia Day’s big historic bike meet (January 23-25 ), the Australian Motorcycle News International Island Classic at Phillip Island, will set some serious records with an astonishing 526 bikes entered – an increase on the 490 machines that competed in 2014; and a massive 56 races on the agenda – up from 44 previously.

The biggest roll up in the event’s 22 year history proves the popularity of the event amongst all lovers of bikes and racing on, and off, the grid.   A haul of retired greats are champing at the bit to compete at Australia’s world famous motorcycle mecca and prove they’ve still got the talent and verve of their competitive past, especially when pitted against today’s young guns.

For bike fans, Phillip Island is the place to be for a weekend steeped in motorcycle magic – history, racing and a raft of tales told that get better year after year. Special guest for the Classic is Australia’s GP crew chief extraordinaire, Jeremy Burgess, who’s spent 20 years steering the careers of Valentino Rossi, Mick Doohan and Wayne Gardner.   Now retired, he’s making his first visit to the Classic as special guest at Friday evening’s Welcome Dinner.

And the Island Classic price is right!   Where else can you get an Australia Day weekend getaway that’s so affordable and haul the kids (15 and under) along for FREE?  Book in advance to get the best bargain – $70* for an adult three day pass plus $70* to camp on-track for four nights, just metres from Gardner Straight.    Go to www.islandclassic.com.au to download a booking form or call the circuit on 03 5952 2710 to get sorted!

Just as it has been since 2005, the headline act at the 2015 Australian Motorcycle News backed Island Classic will be the Tahbilk International Challenge, pitting Australia against the UK, America and New Zealand in the coveted teams’ challenge.   See full listing attached.

Held over four races, with the top five point scorers from each team going towards the final tally, International Challenge rules allow for machines manufactured between 1973 -1984 to compete, and for capacities ranging from 350-1300cc. All engines must be air-cooled.

Australia has an unblemished record in the Tahbilk International Challenge, but worked up a real sweat to defeat the Jeremy McWilliams-led UK team in 2014. It was a massive fright, and in 2015 a number of new faces have been drafted into the Australian squad to provide even more bite, including Jed Metcher, Ryan Taylor, Paul Young and veteran John Pace. That trio will link up with International Challenge hard men such as Cameron Donald, Rob Phillis, Shawn Giles, Steve Martin and Brendan Roberts – all now retired from full-time racing except for Donald, but still enjoying the thrill of the hunt.

Metcher, who’s just had three plates and nine screws removed from his left foot – the residual of a prior injury — represents a real injection of International Challenge youth, and he’s just completed a second shakedown test on the Suzuki Katana he’ll race in 2015.

“This test was a really important one, as next time we hit the track on this Katana, it will be for real,” said Metcher. “I’m quite happy with the setup improvements that have been made since last time I rode the bike at Broadford in November.

“We have been working really hard developing a more powerful engine on the workbench which should be ready for the event and a big help.”

Young, a former road racing star turned journalist at Australian Motorcycle News, will take on his first International Challenge on a Honda Harris F1 machine, and Ryan Taylor, who has dominated the Period 6 ranks at recent Island Classics, will be aboard Yamaha’s towering TZ750.

Australia’s biggest hard chargers in the International Challenge are again expected to be former national superbike champions Martin and Giles, as well Donald and Roberts. The quartet was all fast in 2014, with Giles eventually scoring the individual honours alongside Briton Jeremy McWilliams — both awarded the Ken Wootton Perpetual Trophy.

The UK team will again fight hard for the prize in 2015 with the ageless McWilliams at its disposal, as well as Ryan Farquhar, Conor Cummins, expatriate Glen Richards and the always quotable Isle of Man hero John McGuinness, who said he was “crunching his plums” in race four last year just trying to keep up with the main bunch.

Richards could be a real X-factor: the native South Australian was a successful long-time campaigner in England before retiring from full-time racing – a national supersport title the pinnacle. If he’s on song at Phillip Island, he could be the man to help bridge the gap between Australia and the United Kingdom.

The American squad is headed by Rob Mesa, James McKay and David Crussell, while the Kiwis will keep the others honest with Damien Kavney leading the charge alongside Glenn Hindle, Roger Gunn and Terry Morris.

There are two non-riding team captains, Australia’s Rex Wolfenden and New Zealand’s Stu Avant, the latter a former international who once led a British 500 GP race. Avant is a co-captain with Kevin Grey, and America’s chief is Crussell.

The Island Classic is a celebration of history; a nod to two-wheel engineering feats all the way back to the turn of the 20th century. Racing is held across classes ranging from pre-war to period 6 (up to 1990), and marques to be represented include AJS, Ariel, Harley-Davidson, Indian, Norton, Velocette, BSA, Bultaco, Matchless, Triumph, , Vincent, Aermacchi, Bultaco, Laverda, Norton, Ducati and the four Japanese brands, as well as fare from specialist engine and chassis manufacturers.

The Phillip Island schedule features a record 56 races on the agenda – Friday is devoted to qualifying for the six period classes and the International Challenge, with Saturday and Sunday featuring back to back racing from 9am to 5pm.

For tickets and camping, go to www.islandclassic.com.au for booking forms or call the circuit on 03 5952 2710 on weekdays.

*All prices quoted are purchased in advance, offering savings on gate prices 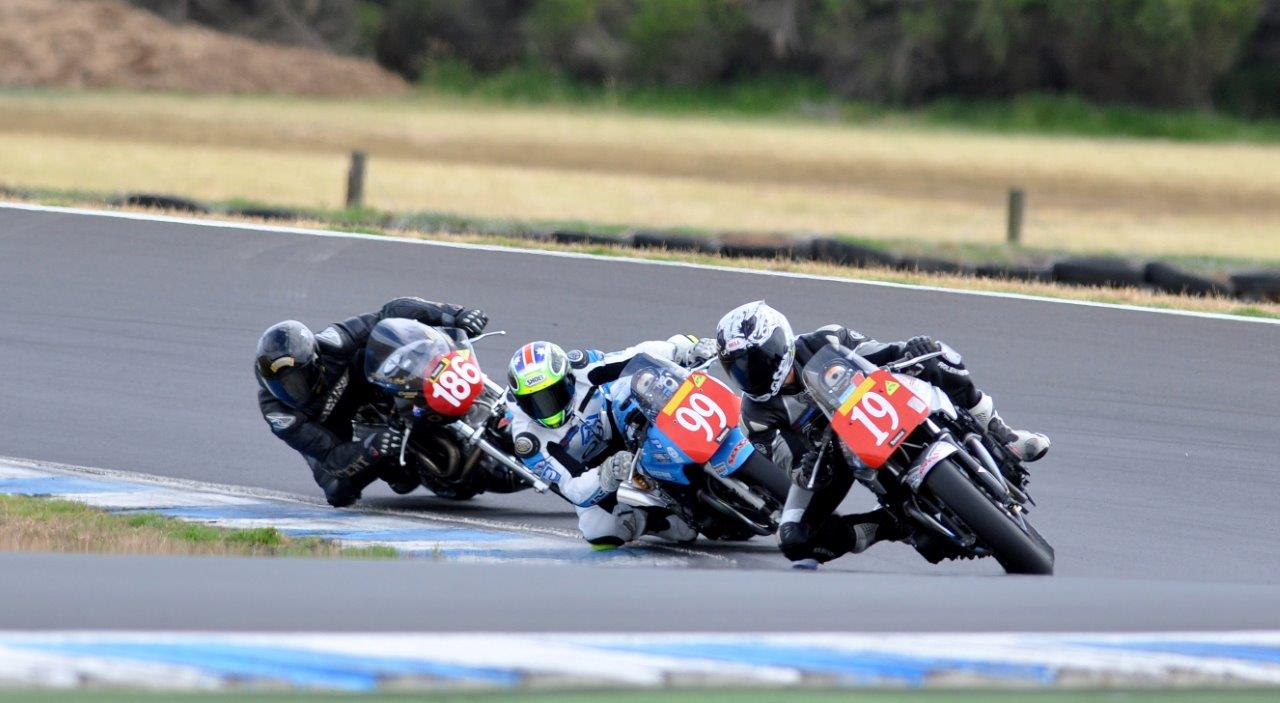 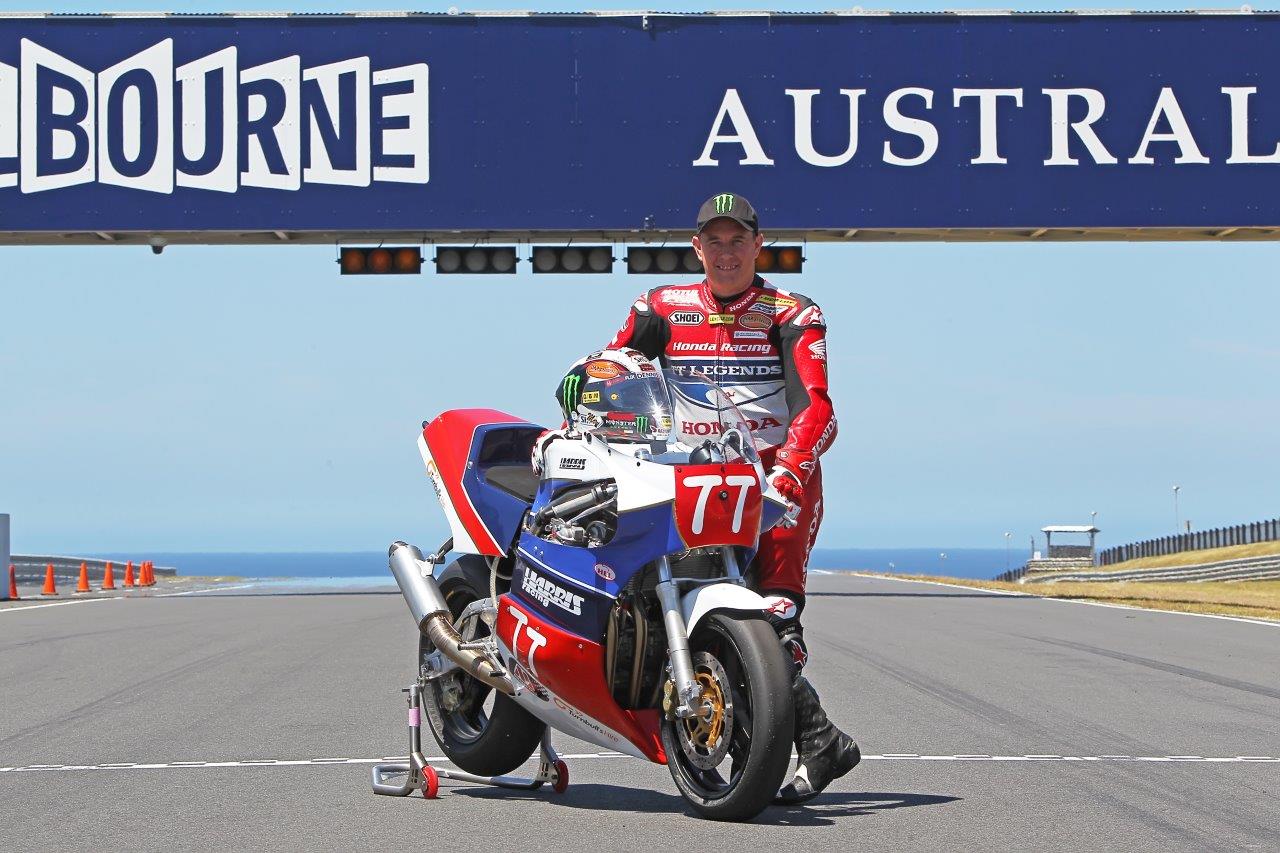 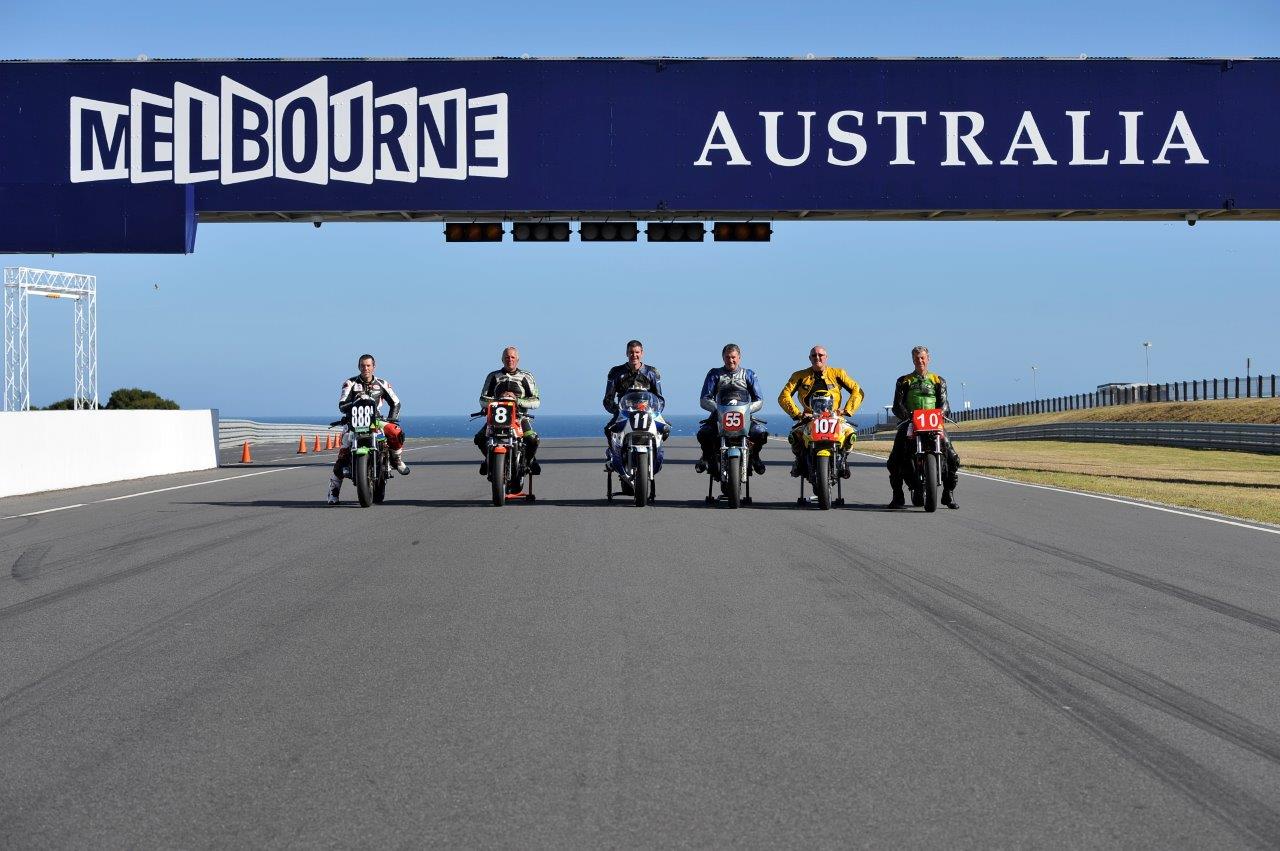 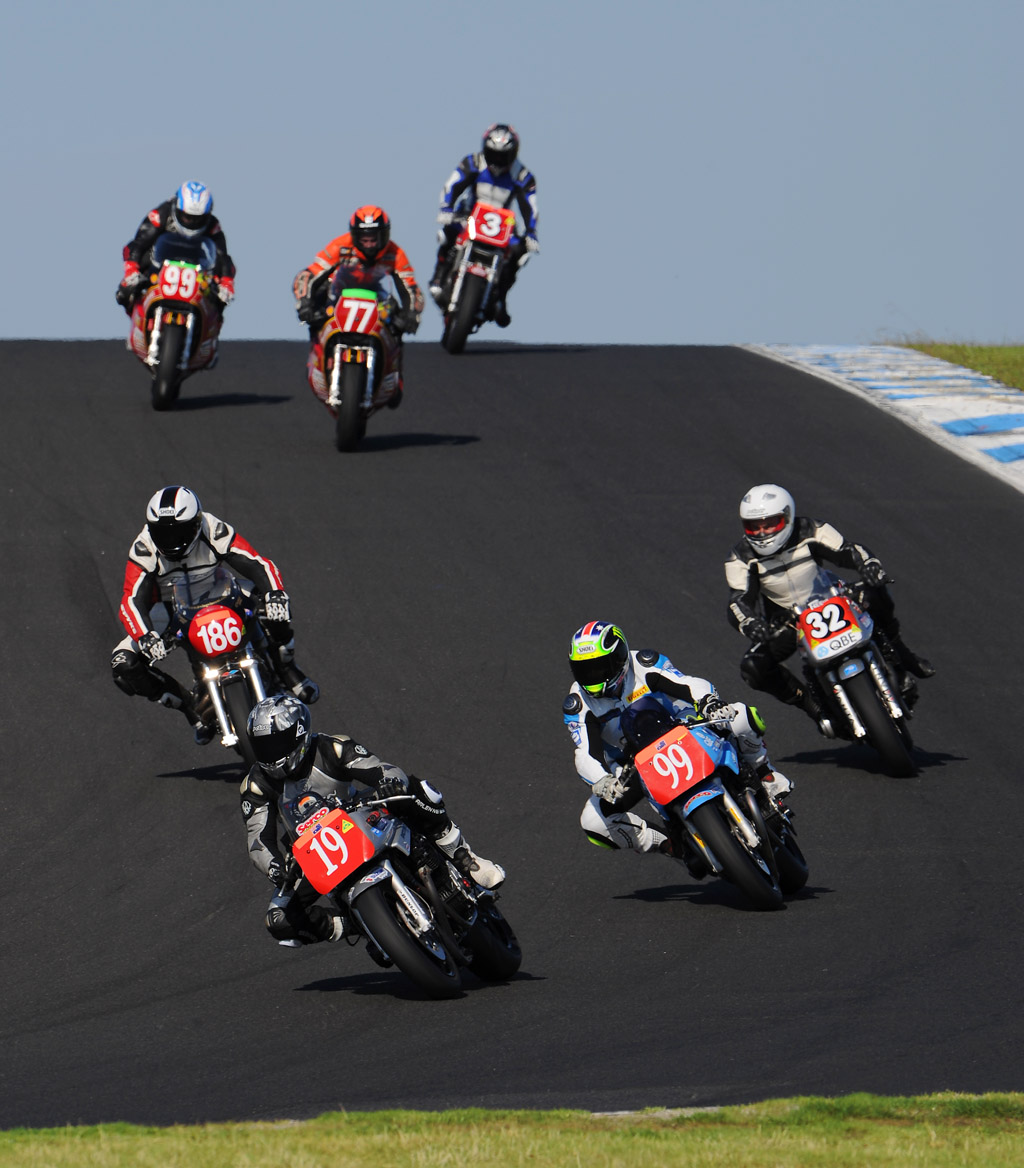 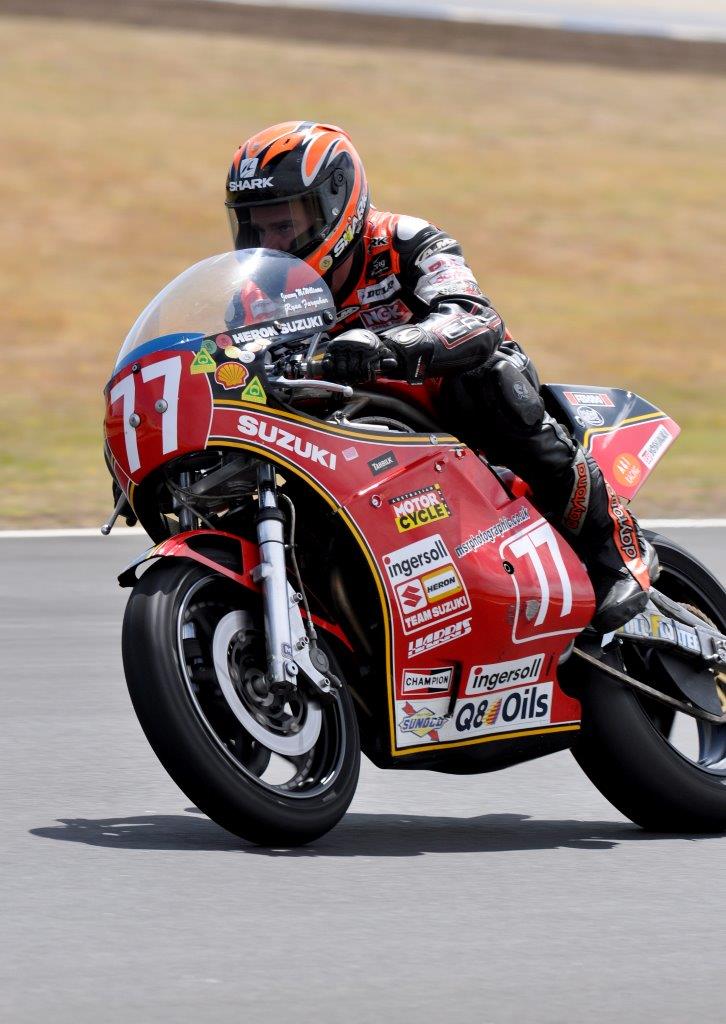