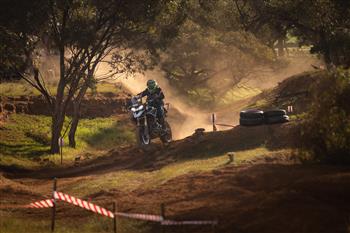 Triumph’s all-new Tiger 1200 Rally Pro has become the world’s first large-capacity adventure bike to enter – and conquer – the gruelling 24hr trial, in South Australia, where the endurance of rider and machine is tested to the absolute limit.

Ridden by none other than Cameron Donald, a two-time Isle of Man TT champion and avid off-road rider and racer, the Tiger 1200 Rally Pro made for an unusual sight among a sea of lightweight enduro bikes over the weekend of July 9-10.

“Physically, that was one of the toughest things I’ve ever done on a motorcycle,” Donald said. “To ride out there in that terrain on these bikes over four six-hour laps for 24 hours was such a battle. It was brutal.

“A lot of people told us we were crazy, not expecting us to finish a single lap let alone four laps to finish the race. Worse yet, an experienced competitor who’s finished the race 24 times said this year’s course was by far technically most difficult.

“The weight of a 1200cc adventure bike didn’t make it easy against lightweight enduro bikes, but I was constantly amazed by how well the new Tiger 1200 got through the terrain. There was nothing it couldn’t do.

“There were boobytraps everywhere including ledges four-feet high and bulldust two-feet deep, often hiding rocks and roots. But the bike’s momentum and off-road oriented 21-inch front wheel allowed you to point and shoot.

“You had to be careful in the tight, technical terrain but, once it opened up, the Tiger was unstoppable. The transit sections were warm and comfortable for us thanks to heated grips, cruise control and semi-active suspension.

“In a race as gruelling as the 24Hr trial, we threw so much at the Tigers, but they were supremely capable and absolutely shined. I had to laugh when I saw other riders lubing and adjusting their drive chains. I just smiled at the Tiger’s shaft drive – no maintenance required.

“I’m gutted both bikes didn’t finish, though, and that just drives home the how hard the event actually is,” Donald said.

The 24-Hour Trial, historically known as the 24-Hour Reliability Trial, has been running since 1924 and is Australia’s oldest motorcycle race. It comprises four six-hours laps with each lap consisting of 12 competitive sections, which are timed (the rider with the lowest cumulative time wins) and 13 transit legs. Three evenly spread fuel stops allow 15 minutes for basic motorcycle maintenance and rider sustenance. Outside assistance is not permitted.

Cam Donald’s teammate for the race and also riding a Tiger 1200 Rally Pro was his childhood friend and “brother from another mother”, Donald Owen – an Expert class enduro rider, B-grade motocross and road racer and professional motorcycle mechanic.

After riding an epic 16 hours of his first attempt of the 24hr trial, Owen hit a deep, square-edge hole hard and was unable to continue, so the bearded wild man immediately turned his attention to supporting Cam get to the finish line.

“‘DNF’ are letters nobody wants to hear in a race, and I was starting to feel heartbroken. But the support from fellow riders, who all stop to help, and volunteer staff at the control points was truly amazing,” Owen said. “When I was stuck in the darkness, a guy walked almost three kilometers through the bush scrub with a head torch to come and help me. I’ll never forget that.

“Our next objective was to keep supporting Cam. His ability to ride at the right level – not too hard, not too slow – and maintain the right mental state to get through all the dark times was unbelievable.”

Cam Donald described his technique to riding a large adventure bike in an enduro is momentum. “As long as you’re going forward, you’re fine.

“Riding in the Enduro Pro mode ensured the bike’s power delivery was nice, linear and easy to use – exactly what you want when you’re in super tight, technical terrain that would test a 250!

“I formed a special relationship with that bike. We struggled, we argued, we laughed, we cried, but I brought her home safe just as she brought me. Together, we crossed the finish line. I can’t believe we did it! I feel as if I’ve won a race!”

Bike preparation for the gruelling race was minimal. The Tigers were fitted with Triumph accessory upper protection bars; aggressive road-legal knobby tyres for maximum traction and an 8.0-inch LED light bar for additional night-time visibility (as per race regulations). Centrestands and pillion mounts were removed for increased clearance.

Significantly lighter and much more powerful, with class-leading handling and specification, plus all of Triumph’s new T-plane triple performance advantage, the all-new Tiger 1200 has been designed to be the world’s most capable, agile and manoeuvrable large-capacity adventure motorcycle.

Following an extensive mass optimisation program across the whole bike, encompassing every component, the new generation is now more than 25kg lighter than the previous Tiger, and up to 17kg lighter than the closest shaft drive competition, based on a comparable specification of motorcycle. This combination delivers a transformation in capability and performance on the tarmac – and the most dynamic and exciting experience off-road.

With the new Rally Pro, this brings for the first time a dedicated 21-inch front and 18-inch rear tubeless wire-spoked wheel set-up, plus the new Showa semi-active suspension with even longer travel, tuned to deliver the ultimate in all-terrain riding, off-road and on.

Making a significant contribution to the transformation in weight and handling capability, the Tiger’s new frame, which is 5.4kg lighter than the previous design, features a bolt-on aluminium rear sub-frame and bolt-on pillion hangers, enhancements developed from customer feedback.

Additional weight savings comes from the new aluminium fuel tank and all-new tri-link swingarm, which is 1.5kg lighter and stronger than the previous single-sided set-up, and incorporates a smaller and lighter shaft drive and bevel box.

Bringing the rider enhanced confidence at low speeds and during non-riding manoeuvres, as well as enhanced comfort and control, all new Tiger 1200 variants come with new seat and tank ergonomics, where the seat has been slimmed down at the front, where it meets the tank.

All models within the Tiger 1200 line-up have an extensive level of protection for a more secure and comfortable ride: handguards are standard for all models, aluminium skid-guard is fitted as standard on the GT Pro and GT Explorer, while an aluminium sump guard is a standard fit for the Rally Pro and Rally Explorer.

Additional protection is provided on the GT Explorer and both Rally variants by the engine protection bars, while the Rally Explorer also comes with fuel tank protection bars. These items can all be added as accessories to the models where they are not standard fit.

Backed by a three-year/unlimited kilometre warranty and a 16,000km/12 month service interval, the all-new Tiger 1200 range is in store now.