The excitement is building for the 38th Melbourne Motorcycle and Classic Car Toy Run, Australia’s largest event of its kind. Sunday December 20th is expected to see the largest ever number of Christmas decorated motorcycles and classic and custom cars making their way to TabCorp Park, Melton in an overwhelming display of the spirit of charity giving. All donations will go to the Salvation Army Christmas appeal for families in need.

Eleven motorcycle feeder runs, five with Police route assistance, will make their way to TabCorp park from all parts of Melbourne, including the long awaited return of the city parade beginning from the Royal Exhibition Buildings Carlton. The rider delivered toy and charity donations will be added to those collected at Masters Home Improvements stores throughout Melbourne, ensuring more families than ever will get a helping hand this year.

“An event this huge wouldn’t be possible without sponsors.” said Chair of the Victorian Motorcycle Council (VMC), Rob Salvatore. “The VMC proudly continues the tradition of running the Toy Run which allows riders to show their big hearts, but we wholeheartedly thank the organisations who got behind the event, helping it to grow and support even more families in need.”

The VMC acknowledges and thanks the following sponsors and supporters. TabCorp park Melton for working with and providing a venue large enough to hold the 2015 Toy Run. Masters Home Improvements for providing their Melbourne stores as Toy Run donation collection points guaranteeing the largest ever donation. CityLink Transurban who will donate motorcycle tolls collected on the morning of the event to the Salvation Army Christmas Appeal. Maurice Blackburn
Lawyers for sponsoring the Royal Exhibition Buildings Toy Run starting point paving the way for the return of the City streets parade. Rider Brothers for providing the safety barriers allowing spectators to get as close as safely possible to the stunt display action. Armstrongs for providing the trucks to take and deliver the record breaking donation to the Salvo’s. Defy FMX and Lukey Luke for providing two spectacular stunt shows to wow ToyRun goers and help generate an amazing event atmosphere. Shannons for supporting motoring enthusiasts proudly showing and displaying their prides and joys. Victory and Indian for marketing support to help spread the word to riders and beyond. Volunteers at every level that have stepped up to help lead the rides and coordinate event logistics ensuring a safe family friendly festival. And of course riders, motoring enthusiasts and their families, who will bring their Christmas spirit and be the heart and soul of the event.

The 2015 Melbourne Toy Run is expected to cement itself as the largest event of its kind in Australia. More details on this and all Australian motorcycle toy runs can be found at: www.toyrun.org.au 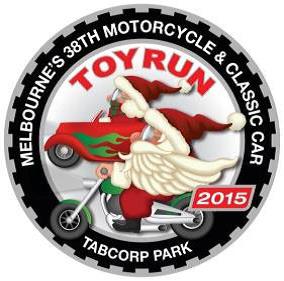