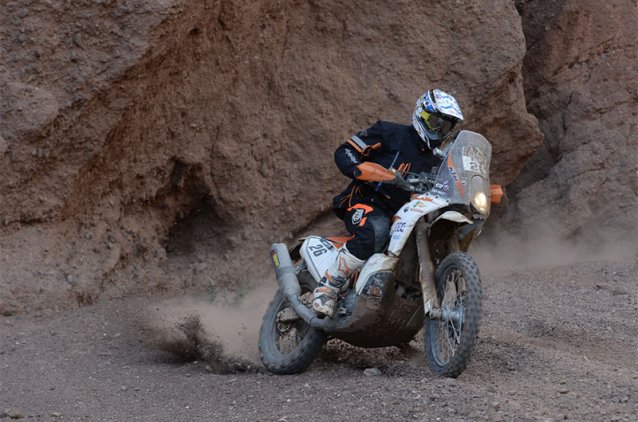 Only two more stages remain between Australia’s Toby Price and an astonishing podium finish on his debut in the Dakar Rally, 2015.

The 27-year-old KTM rider surged into third place overall in the motorcycle class after the event’s 11th stage in Argentina, where Price finished almost two minutes ahead of chief rival Pablo Quintanilla.

Price was fifth fastest on the test, two minutes behind stage winner Joan Barreda, but awarded third overall after both leading Hondas of Barreda and Paulo Goncalves were handed 16 minute penalties for engine changes.

Price now carries a one and a half minute advantage over Quintanilla in the overall standings, while Goncalves’s penalty looks to have settled the battle for the overall win for Marc Coma.

Prior to starting the Dakar, Toby Price said his goal was simply to finish the event. If he did that inside the top 15-20 riders, even better.

Now he sits on the edge of etching his name in history as just the second Australian to finish on the podium of the iconic event.

The only other Australian to accomplish that feat was South Australian rider Andy Haydon, whose remarkable ride into third place on the 1998 event could be a good omen for Price — Haydon achieved it in his first (and, as it would prove, only) Dakar. Haydon’s ride is also the best finish for a rookie rider in the event’s recent history.

Although he now holds a slight advantage over Pablo Quintanilla, who has spent recent stages struggling with illness, Price is not counting his chickens.

“I can’t get too excited just yet,” Price said. “Two days is still a long way away. There are still a lot of kilometres to cover.

“We’re just trying to do the best we can, stay fit and healthy, keep the bike in good shape and that’s just been my plan the whole way, pretty much.

“We’re doing all we can and at this stage we’re having fun while we’re doing it. It’s not too far from the finish.”

The eleventh stage took riders from the overnight bivouac at Cachi to Termas de Rio Honda, just down the road from MotoGP’s newest venue, along a 357 kilometre special stage, winding along the region’s famous Ruta 40 route.

Price said he took a conservative run through the demanding marathon stages, which actually suited his relative inexperience on the event.

“I’m still trying to learn the navigation, and there wasn’t really that much navigation on the last two stages,” he explained.

“They kind of suited me a bit more, but then there was still a good amount of danger in there and I had a couple of little moments on the first day, so I just backed off and tried to just get through it.

“I don’t want to be going and getting an injury and going out of the race with an injury this close to the finishing line.”

He will likely have a battle on his hands all the way to the finish in Buenos Aires on Sunday, with Quintanilla vowing to give it his all despite his illness.

“It was a very difficult marathon stage for me,” Quintanilla said.

“Yesterday I was ill. There were cliffs, I was dehydrated and suffering from headaches. I didn’t feel great again today with headaches on the mountain tracks once more. At the bivouac, I’m going to go and see the doctors.

“The main thing is that we are nearing the finish. There are 2 stages left and I’m going to keep on fighting until the last kilometre.”