World champion Jonathan Rea has completed a stunning double in the opening round of the 2016 Motul Superbike World Championship at Phillip Island by narrowly winning both 22-lap races.

The metronomic Kawasaki pilot didn’t put a foot wrong, defeating Chaz Davies (Ducati) and Michael van der Mark (Honda) in Saturday’s race one, and then backing it up this afternoon by blasting to the finish line ahead of van der Mark and Davide Giugliano (Ducati).

The victories were Rea’s 30th and 31st in the production-based series, and he was particularly animated on both occasions, sharing triumphant wheelies with the crowd before stopping at the back of the circuit to celebrate with his ‘local’ mates from Cowes and Bright — he spends his Aussie summers shuttling between the two Victorian towns with his Phillip Island wife, Tatia, and two young sons, Jake and Tyler.

“It’s incredible to get the double,” said Rea.  “I want to thank all the local fans who came out and supported me.

“The key to my race today was having fixed the bike to really allow me to fight with the other riders in the heavy braking areas.

“It was impossible to pull away from the other riders, so I just set my own pace and stay composed.”

Rea’s perfect score was the first at Phillip Island since Spaniard Carlos Checa in 2011, and he now takes a 14-point lead (50 to 36) over van der Mark into the second round in Thailand from March 11-13. Giugliano is third in the standings on 29 points from Yamaha’s Sylvain Guintoli (21) and Kawasaki’s Tom Sykes (21).

Van der Mark was delighted after earning his best ever points haul in a WorldSBK round.

“It has been an amazing way to start a season,” said van der Mark.  “Today’s pace wasn’t as high as yesterday, as we were all riding smarter to save our tyres.

“Eventually, I tried to up the pace a little bit as the group wasn’t really breaking up.

“It was a shame Chaz crashed out, and on the last lap I wanted to attack Johnny but he was stronger. I have enjoyed riding the Honda around here, so a big thanks to the whole team.”

Australian Josh Brookes is in ninth position on 13 points after his 10-9 results at Phillip Island on the BMW Motorrad S 1000 RR.

Both WorldSBK races saw a freight-train of riders battling at the front, but as the pressure intensified riders were soon being dropped off the conga line.

In the opener it all boiled down to a dogfight between Rea and Davies on the final lap. Davies managed to get past Rea at turn 10, but it was short-lived as Rea blasted straight back into the lead at the next corner and held the advantage to the chequered flag.

Guintoli’s teammate Alex Lowes was as high as sixth but crashed out on lap 16, while another to bite the dust — agonisingly — was German rookie Markus Reiterberger (BMW Motorrad) on the final turn.

In race two, Davies cooked his goose when he crashed on the final lap while trying to pass Rea under brakes at turn four. He remounted and finished in 10th position, a fastest lap of 1:31.321 scant consolation for what could have been.

“We made good progress over the weekend,” said Brookes. “However, it makes me a little annoyed that if we had worked on some things earlier we could have done so much better.

“As a rider you want more — you are never satisfied — but if I look at all the circumstances I have done the best I could.

“I am happy with my performance, and hopefully we can make some positive changes heading into Thailand and we can improve again there. It was nice to get the season started and we now have a solid platform to work with.”

Australia’s second rider in the WorldSBK races, Ducati-mounted Mike Jones, was 14th in race one before crashing out of the same spot in race two at turn four.

Ex-Moto2 rider Randy Krummenacher made the perfect start to his fledgling world supersport career with Kawasaki by taking a sensational victory in today’s dramatic 18-lap race.

The Swiss rider inherited the lead on lap 16 after teammate and world champion Kenan Sofuoglu sensationally crashed at turn six — later revealed to be the result of a blown rear tyre — and he was then unchallenged as he claimed the win from Honda rider Federico Caricasulo and Aussie top gun Anthony West (Yamaha).

West was sensational and pushed unbelievably hard in his wildcard appearance on the locally prepared YZF-R6, and came onto Gardner Straight for the last time in front of Caricasulo but was unable to hold off his rival in the run to the chequered flag.

It was West’s second WorldSSP podium at Phillip Island after finishing third in the 2009 race.

“I just kept fighting the whole time, and that’s the best I could have done with the equipment I had,” said West. “The world championship regulars had a little bit more power than me down the straight, and my strategy was to get back past them as quickly as possible and try to block them.

“It’s great to be back on the WorldSSP podium for the first time since 2009. I always try to do the best I can, and today it really paid off for me.”

Sixteen-year-old Lachlan Epis (Kawasaki) was 21st, while Kane Burns failed to finish on his Suzuki.

Things eventually turned sour for Cluzel — who won the last two WorldSSP races at Phillip Island — when he ran off at turn two battling with West.

Krummenacher came to WorldSSP after 10 years in grand prix racing — five years apiece in 125 GP and Moto2. His crew chief is none other than Australia’s former two-timer WorldSSP champion Andrew Pitt. 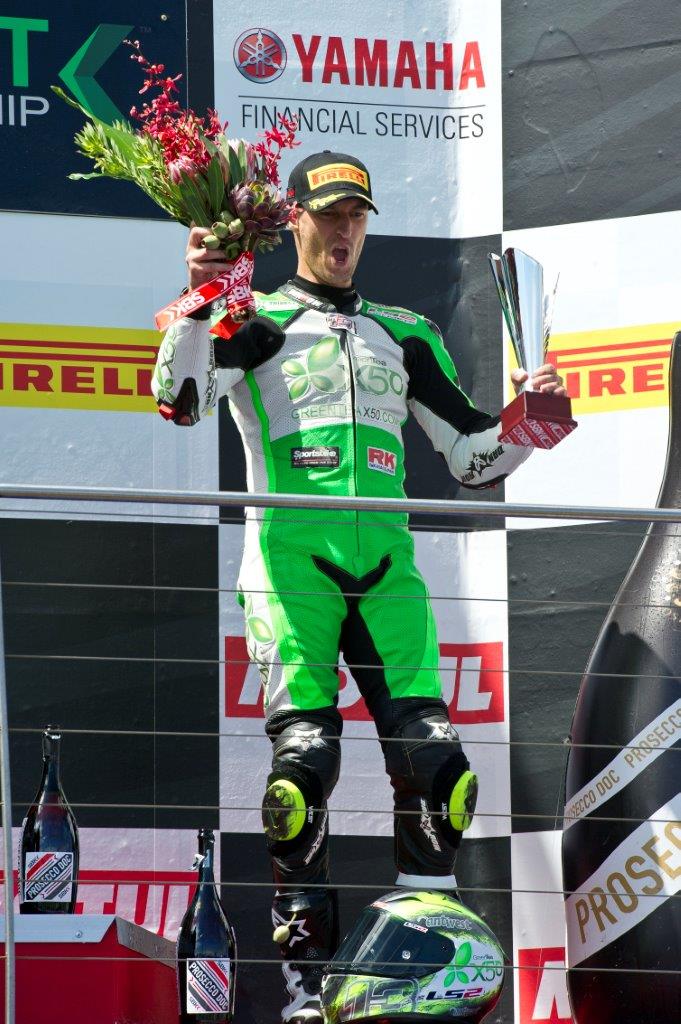 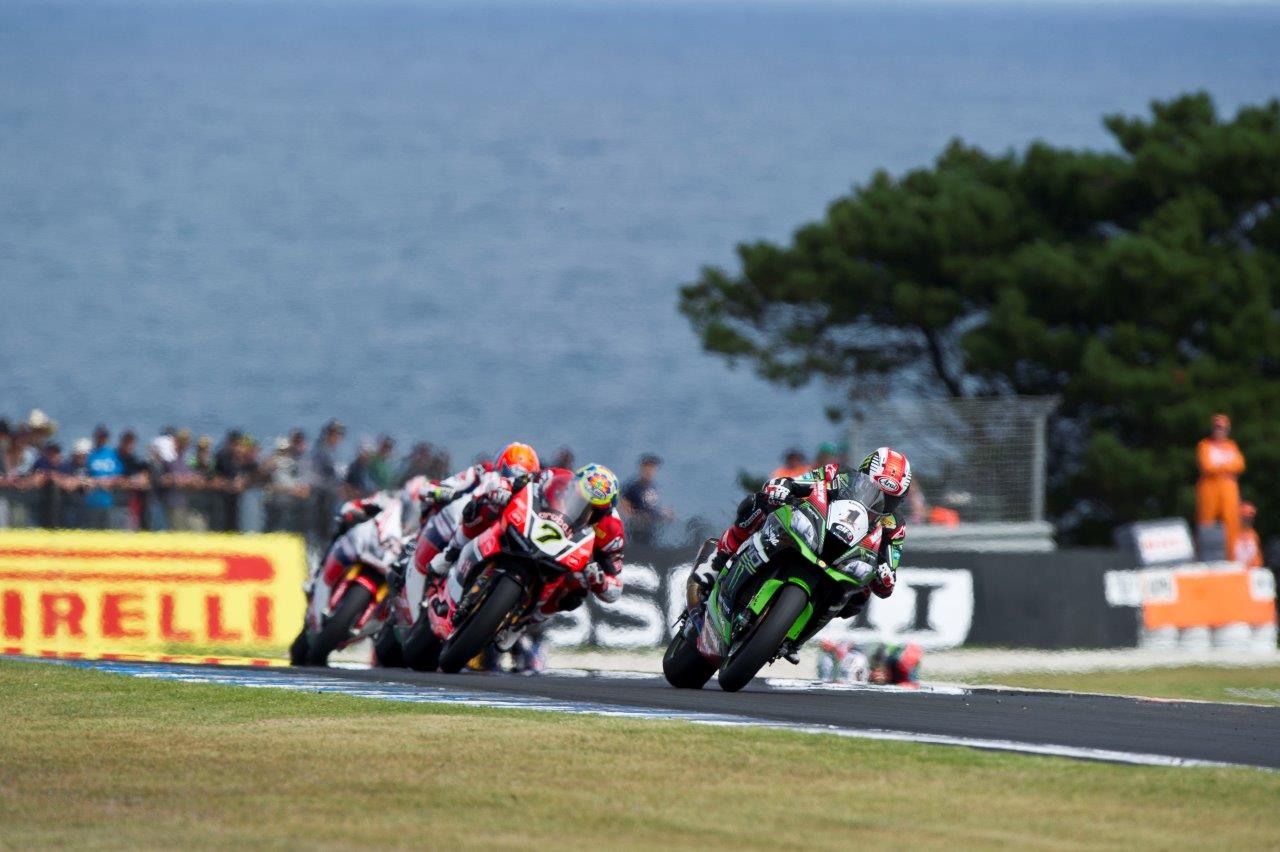 Jonny Rea out in front and takes the double win! 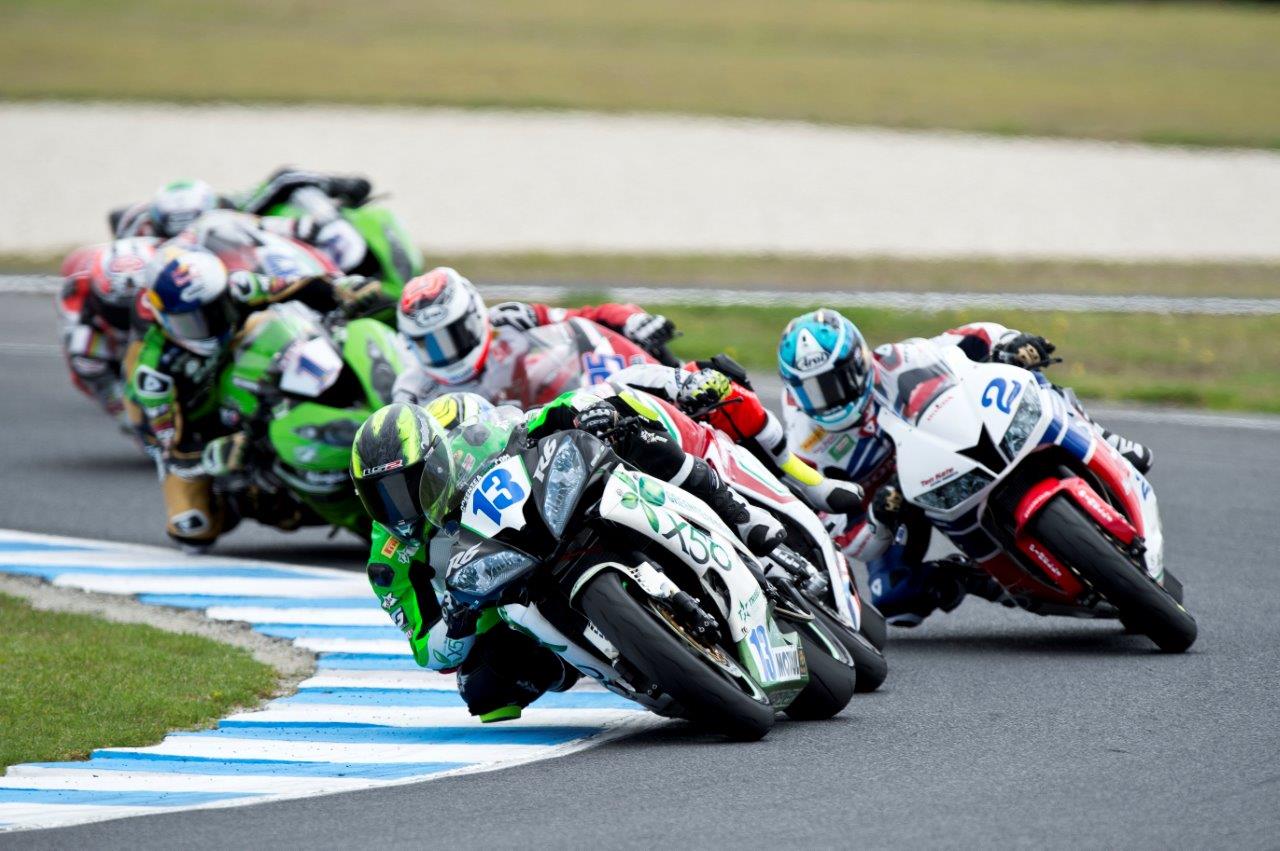 Aussie, Ant West lead most of the way to come in 3rd!