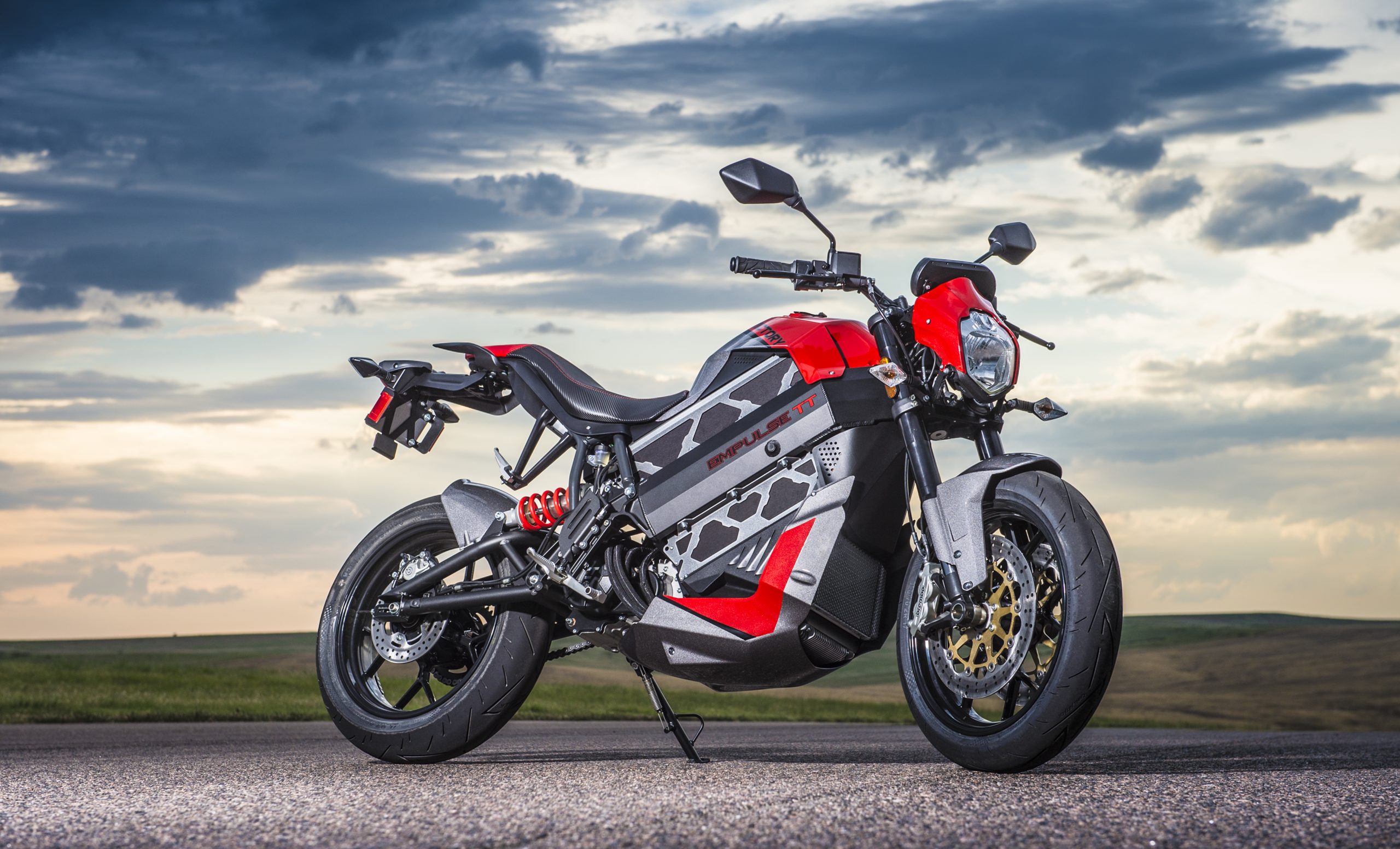 Building on the innovative design and engineering that produced the fastest U.S. electric motorcycle at the 2015 Isle of Man TT Zero race; Victory Motorcycles has introduced the 2016 Empluse TT, the first all-electric addition
to the Victory lineup.

The Victory Empulse TT is a fully electric street-legal sport bike that is as capable of carving tight lines on twisting roads as it is powering the daily commute. Building on Victory Motorcycle’s focus on performance, the Empulse
TT features a sport bike-style aluminum beam-frame, adjustable suspension, and aggressive brakes. With a combination of advanced technology and stylish, modern design, this unique new motorcycle delivers
outstanding overall performance, zero-emission output, and a torquey motor.

“We have always been known for great handling and power, so the Empulse TT is an ideal fit in the expanding Victory lineup,” said Motorcycle Product Director Gary Gray.
“The Empulse TT was developed primarily as an electric motorcycle delivering a sporty ride,” said Victory Electric Product Manager Joshua Katt, “but with dual ride modes – ECO and SPORT – to choose from, and the addition of
a gearbox, the Empulse TT is a versatile motorcycle that can be used for impressively sporty riding or as a casual commuter.”

Steve Menneto, VP Motorcycles, said Victory Motorcycles is committed to expanding brand awareness and sales globally, and the Empulse TT will allow the brand to reach more markets. “This is a company that does not fear
technology and progressive products, and we want to be strong in the electric motorcycle segment,” he said.

The Empulse TT shares some DNA with the original Brammo Empulse R motorcycle. Victory has been working with Brammo since 2011, but in January 2015 Victory’s parent company, Polaris Industries, acquired Brammo’s
motorcycle assets. Since then, Victory engineers worked with the Brammo product team to achieve improvements in battery capacity, display function, and handling. The result is a Victory Empulse TT with
advanced technology, impressive performance, and sporty styling that draws from the Isle of Man Zero TT race bikes.

The Victory Empulse TT is capable of top speeds of over 100 mph, and it has a high-capacity 10.4kWh battery. The bike has a built-in battery charger and an easily accessible SAE J1772 plug atop the bodywork in front of the seat. The bike’s Brammo Power Lithium Ion battery fully charges in just 3.9 hours using a Stage 2 charger (available as an accessory utilizing a 240V outlet).

In typical riding, the Empulse TT battery provides a rider with a range of about 65 miles (104 km), and a range of 100 miles (161 km) is possible with throttle management and use of the bike’s regenerative charging. In
preliminary testing, the bike demonstrated a Motorcycle Industry Council (MIC) city range of 94 miles (151 km). The bike delivered an MIC “combined 70 mph highway and city range” of 57 miles (92 km).
Riders can make the most efficient use of the battery’s 10.4kWh of electricity by using the six-speed gearbox.

Shifting and downshifting help to create regenerative power (under deceleration), and also produce a feeling familiar to experienced riders of the compression braking on gasoline-powered motorcycles. The rider only needs to use the clutch when shifting between gears, not for taking off or coming to a stop. When coming to a stop, a rider can leave the bike in gear, or choose to click the shifter down (without pulling in the
clutch) to put the bike in neutral. To take off from a stop, the rider simply needs to twist the throttle to unleash the liquid-cooled electric motor’s impressive torque.

In the Empulse TT’s proprietary transmission, neutral is found between 2nd and 3rd gears, and the transmission can be left in 3rd gear for most riding speeds and conditions. To begin riding, a rider can simply turn the bike’s
power on; select 3rd gear (without the clutch), twist the throttle, and go.

Not all competitive electric motorcycles have gearboxes, so the Empulse TT gearbox gives the bike a significantly sportier feel, and it enhances a rider’s engagement with the bike.

In everyday riding conditions, the Victory Empulse TT can be operated in ECO mode, but it also has an optional SPORT mode for high-performance riding. In SPORT mode, 20 percent more battery power is released to the
motor, resulting in enhanced acceleration. SPORT mode also increases the amount of regenerative braking – or “regen” – which further increases the feeling similar to compression braking when the rider rolls off the throttle. Regen uses the inertia of the motorcycle to return energy from the motor back into the battery pack, which increases available energy. To select SPORT mode, a rider presses and holds the start button for 1 second.The bike’s LCD data display features a speedometer, tachometer, gear indicator, and clock. It also displays the battery level as a horizontal bar accompanied by the percentage of battery energy remaining, and provides an estimate of remaining riding range.

The new Victory Empulse TT electric motorcycle is scheduled to be available for purchase in the United States only in late 2015.

Victory Motorcycles Australian Country Manager, Peter Harvey said “it is certainly an exciting time at Victory; this bike embodies one of the new directions the brand is taking to deliver on performance and modern
American muscle. We will go through a local evaluation process with riders before announcing our plans for the Empulse TT in Australia.”