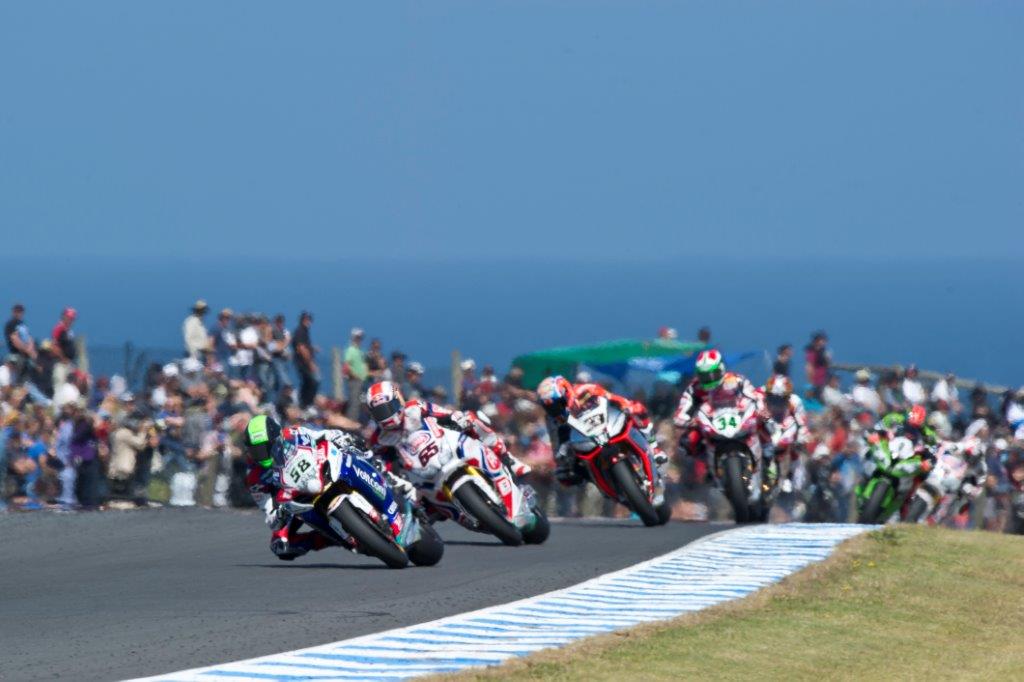 Australia’s opening round of the eni FIM Superbike World Championship, next February 20-22 at Phillip Island, will be known as the 2015 Phillip Island Swann round with confirmation today that leading Australian insurer, Swann Insurance, has backed the event as the Event Main Sponsor.

Glenn Rosbrook of Swann Insurance was greeted byFergus Cameron, managing director of the Phillip Island circuit, (pictured) to mark the important announcement of the association.

Having insured Australian motorcyclists for over 40 years, Swann Insurance is pleased to support an event that showcases the world’s leading production-based bikes and their grid of talented riders.

Held at the world’s motorcycling mecca, Australia’s Phillip Island Grand Prix circuit, the event kicks off the 2015 championship and is a favourite of motorcycle riders from Australia and around the world.

“We are excited about our sponsorship and our involvement further connects Swann Insurance with the Australian motorcycle community,” said Glenn Rosbrook, Senior Manager Direct of Swann Insurance.

“World supers is an event that motorcycle riders really love.  They love, and Swann loves, that the bikes on the track are so similar to the bikes motorcyclists own, and we insure, on the road.

“We believe motorcycle fans love the competitive grids and the intense racing of world superbikes.  There is no better place in the world to showcase the category than at Australia’s Phillip Island!”

Swann Insurance has a rich history of involvement in Australian motorcycle racing, supporting MotoGP, Australian Superbikes and even off-road motorcycling action with the MX-Nationals.

Marc Saurina, DORNA WSBK Commercial and Marketing Director, welcomed Swann on board for 2015.

“We are glad to welcome Swann Insurance, one of Australia’s largest general insurance groups, to the eni FIM Superbike World Championship, as the Event Main Sponsor. Their presence in our competition shows how important it is for national brands to be visible worldwide, while being close to their customers on site,” said Marc Saurina.

World superbikes delivers the cream of production bike racing, with the best bikes on the street including Kawasaki, Ducati, Honda, BMW, Aprilia, Buell, MV Agusta and Suzuki, being put to the test on the track.

In 2015, the entire world superbike field will be racing under standardised new rules, which will combine the superbike class chassis with superstock spec engines.

Tickets for world superbikes are super affordable.   At just $110* for a three day pass purchased in advance, children under 15 free**, and inexpensive camping options on-circuit, world superbikes is an event for the entire motorcycling community to enjoy.   People can bring their bikes and ride to any part of the circuit to watch the action and celebrate the enjoyment of life on two wheels.

Tickets are on sale for the 2015 FIM Superbike World Championship, Phillip Island Swann round, next February 20-22 at www.worldsbk.com.au or by ringing the circuit on 1 300 728 007.

Visit www.swannmotorcycle.com.au or facebook.com/swanninsurance to keep up to date with all world superbike news.