Following a cycling incident close to Rimini, on the east coast of Italy, last Wednesday 17th May, it is with the greatest sadness that we report the passing of Nicky Hayden (Red Bull Honda World Superbike Team).
Thirty five year old Hayden was involved in a collision with a car whilst out training and was taken directly to a local hospital by ambulance. Following immediate treatment, the American from the state of Kentucky, was then taken to Maurizio Bufalini Hospital in Cesena for further treatment and possible surgery, with fiancé, Jackie, and team members beside him.
Every effort was undergone in order to provide Hayden with the best possible care, but on Monday 22nd May it was announced he had succumbed to his injuries.
2006 MotoGP™ World Champion, Nicky burst onto the world scene in 2003 just one year after he was crowned AMA Superbike Champion. Securing two podiums in his opening season, he took his debut victory in 2005 at Laguna Seca and sensationally reached his dream in 2006 as he was crowned MotoGP™ World Champion. Making the move over to the MOTUL FIM Superbike World Championship in 2016, Nicky stood on the podium four times for Honda, one of which was his debut victory at Sepang International Circuit.
The FIM, Dorna WSBK Organization and the Phillip Island Grand Prix circuit wish to pass on its condolences to the family, friends and team of Nicky Hayden.
Following is the full statement Statement from Red Bull Honda World Superbike Team.
It is with great sadness that Red Bull Honda World Superbike Team has to announce that Nicky Hayden has succumbed to injuries suffered during an incident while riding his bicycle last Wednesday.
Nicky passed away at 19:09 CEST this evening (Monday May 22) (3:09 AEST 23.5.17 ) at Maurizio Bufalini Hospital in Cesena, Italy. His fiancée Jackie, mother Rose and brother Tommy were at his side.
Throughout his career Nicky’s professionalism and fighting spirit was greatly valued and carried him to numerous successes, including his childhood dream of being crowned MotoGP World Champion with Honda in 2006. As well as being a true champion on the track, Nicky was a fan favourite off it due to his kind nature, relaxed demeanour, and the huge smile he invariably carried everywhere.
Nothing says more about Nicky’s character than the overwhelming response expressed by fellow racers and his legions of fans over the past few days. Jackie and his family are truly grateful for the countless prayers and well wishes for Nicky.
The ‘Kentucky Kid’ will be sorely missed by all that ever had the pleasure of meeting him or the privilege to see him race a motorcycle around a track, be it dirt or asphalt.
The racing world says goodbye to one of its dearest sons. Rest in peace Nicholas ‘Nicky’ Patrick Hayden.
From brother Tommy Hayden
“On behalf of the whole Hayden family and Nicky’s fiancée Jackie I would like to thank everyone for their messages of support – it has been a great comfort to us all knowing that Nicky has touched so many people’s lives in such a positive way.
“Although this is obviously a sad time, we would like everyone to remember Nicky at his happiest – riding a motorcycle. He dreamed as a kid of being a pro rider and not only achieved that but also managed to reach the pinnacle of his chosen sport in becoming World Champion. We are all so proud of that.
“Apart from these ‘public’ memories, we will also have many great and happy memories of Nicky at home in Kentucky, in the heart of the family. We will all miss him terribly.
“It is also important for us to thank all the hospital staff for their incredible support – they have been very kind. With the further support of the authorities in the coming days we hope to have Nicky home soon.”

Remembering Nicky Hayden
WorldSBK star Nicky Hayden sadly passed away on Monday 22nd May, after the American was involved in a collision with a car whilst cycling on the Riviera di Rimini last week. A true champion on and off track, Hayden will be deeply missed.
WorldSBK race winner, MotoGP™ Legend, 2006 World MotoGP Champion, fiancé, uncle, brother, son, friend or simply the “Kentucky Kid” who rose from American dirt track to the absolute pinnacle of his sport, Hayden was known for many things to many people, and put his name to an astounding number achievements both within racing and beyond its limits – key amongst which was his moniker as ‘the nicest man in Grand Prix racing’. A true competitor with an incredible commitment to his sport, and a true family man dedicated to the people around him.
First riding on the dirt in his native USA, Hayden then continued his career on tarmac and was crowned AMA Supersport Champion in 1999. Next came the AMA Superbike crown in 2002 – becoming the youngest rider to achieve the feat – before a move to the MotoGP™ World Championship for 2003. He took two podiums that year, at Motegi and Phillip Island, as a rookie. More podiums followed in 2004 before Hayden took his first pole and Grand Prix victory at Laguna Seca in 2005.
The following year, 2006, the “Kentucky Kid” became the MotoGP™ World Champion as he beat Valentino Rossi to the premier class crown, securing the title in the last round of the year in Valencia.
He moved to Ducati in 2009 and, later, the Aspar team, before racing his last full season in MotoGP™ in 2015. He was then inducted into the MotoGP™ World Championship Hall of Fame at the season finale in Valencia.
The next challenge for the ‘Kentucky Kid’ was WorldSBK, where Hayden took a number of podiums and his first win in the class in his rookie year, beating difficult conditions at Sepang to join another exclusive club as he became a winner in both MotoGP™ and WorldSBK. The American also became the first MotoGP™ Legend to return to Grand Prix racing in 2016, as a replacement rider at Aragon and Phillip Island.
Hayden raced his last laps for Red Bull Honda World Superbike team at Imola, in Italy, on May 14th. The American’s dedication to competition was as strong as ever in his sophomore year in World Superbike, where he was once again proving his incredible work ethic, passion and dedication to two-wheeled motorsport.
Hayden will be deeply missed by the paddocks he has graced throughout an incredible career, his millions of fans around the world, and by all those closest to him. We wish to pass on our sincerest condolences to his family, friends, team and colleagues as we sadly bid farewell to the “Kentucky Kid” far too soon – a true legend of the sport, and to all those who knew him.
Remember and pay tribute to Hayden with the hashtag #RideOnKentuckyKid.

More on Nicky
The passing of the American MOTUL FIM Superbike World Championship rider leaves a deep mark in the paddock of WorldSBK
The world of motorcycling will remember Nicky Hayden as the fast, talented, conscientious and spectacular rider and off the track, for his good nature and extraordinary charisma. All those qualities were welcomed when The Kentucky Kid arrived in the World Superbike Championship in early 2016, to begin a new stage in his career.
Hayden had no difficulty adjusting to the World Superbike paddock, with his down to earth nature and always being close to the fans, he was perfectly in keeping with the character of his new home.
The North American rider made his debut in WorldSBK in February 2016 at Phillip Island, a track that he knew well from his long MotoGP career. On his first weekend he narrowly missed out on securing his debut podium as he remained a fraction of a second behind Davide Giugliano on the last lap. Hayden, who came straight off the back of a MotoGP season without a head start in WorldSBK, then confessed: “I learned a lot about the bike this weekend, but also about the Championship as a whole. It has been very useful, and I won’t lie: I have enjoyed being competitive and being there again. ”
He would soon experience new joy in his debut year of the championship, and it didn’t take him long to understand how to get the best out of his Honda Fireblade. Hayden secured his first podium finish in the fourth round of the year, taking a 3rd position at Assen. This was only the start of his joy, as the long-awaited return to the top came shortly after the second Sepang race in Malaysia, which took place in rainy conditions on a soaked asphalt.
Hayden grabbed the opportunity from the first moment and took off into the distance, a risky strategy which left rivals with no answers. “I know people say that you can’t win the race in the first lap but in the wet races you can,” he said after a stunning performance in which he combined skill and courage. It had been ten years since his last victory and for Hayden, who was always self-critical, it was also the confirmation that he could continue to push towards new limits: “To get a win has been nice (in reference to Sepang), to get a win or a podium but I can’t be satisfied, I wanna do more and do it better”
The American knew that he had another good opportunity in the United States Round, as Laguna Seca is his home track and the setting of his most memorable MotoGP successes. On a very emotional weekend, Hayden was reunited with his fans that ignited him, in the setting of a stunning circuit with challenging hills and corners that he knew perfectly. His Kawasaki rivals of Jonathan Rea and Tom Sykes took the victories, and Hayden stood on the podium in the first race; which was a third hard-fought match that allowed him to say goodbye to Laguna Seca and his fans from the heights of the podium: “It’s a great Feeling. I know [the fans] would prefer a victory, and so would I, but being on the podium in a circuit that I love and with fans that I love makes me feel very happy.
A month later, the Kentucky Kid would secure his fourth and final podium in the WorldSBK Championship. As the series resumed after the summer break at the German circuit of Lausitzring, he secured third position in the Race 1 after overtaking Sykes in the final laps. “I really wanted to beat Tom, I saw the fans and I thought, ‘We’re going to give them something,’ so I tried to push after him,” he said after the race which explained his stunning level of motivation: which was the competitive challenge before him and the fans in the stands.
After finishing his first year with a solid top five in the Championship standings, Hayden was injured during the preseason. Following an operation for an anterior cruciate ligament rupture whilst flat track training, he underwent a thorough rehabilitation programme for several weeks, in order to make sure he would be fit for the opening round of the 2017 Championship in Australia.
The current season had not yet brought him many positive results. The new Honda CBR1000RR Fireblade SP2 required time and dedication to reach its full potential, and Hayden worked hard with his recognisable determination in the five rounds he has competed this year. His seventh place in Buriram, Thailand was his best result of the season, and the American rider was very focused on turning the situation around.
The tragic accident that has taken his life this week has cut short his chance to develop his bike and chase the dreams Hayden treasured within. 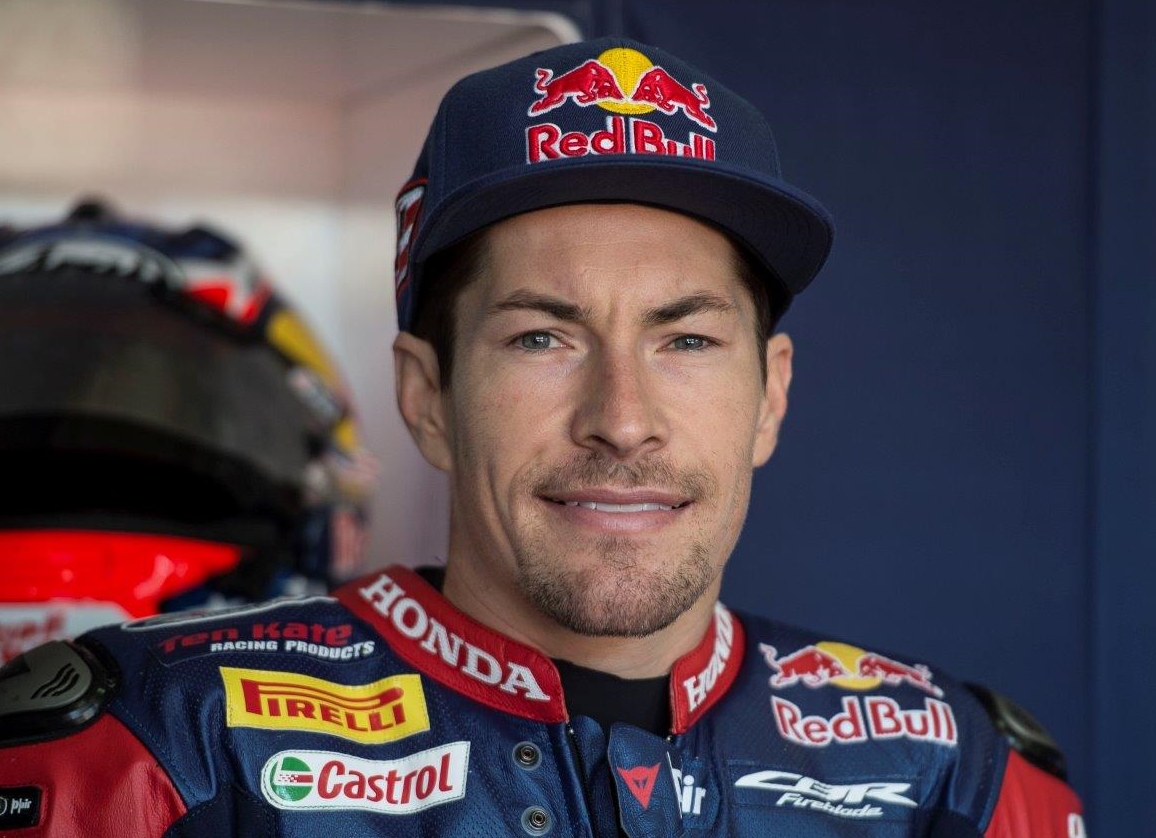