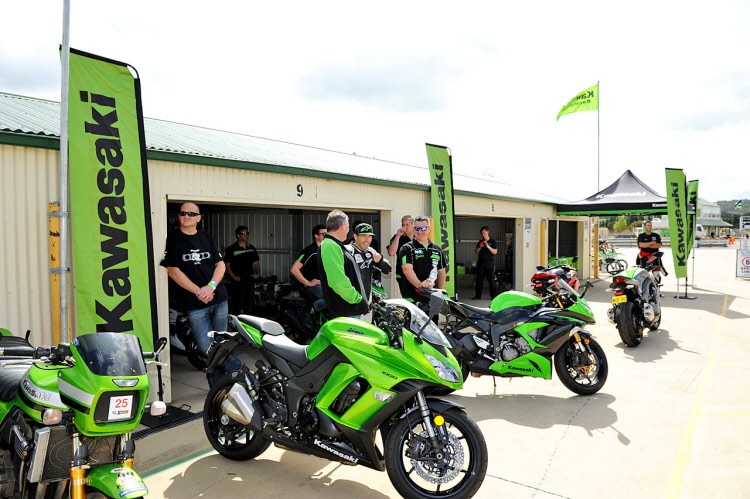 [lightbox thumb=”https://amc.fxbytes.com/wp-content/uploads/2014/07/l_ktg-080414_3441-1.jpg”]
Many of the newly signed up Kawasaki Team Green Australia members used the low cost track ride day as a chance to ride their Kawasaki on a race track for the very first time.

There were many special guests in attendance to help make the day even more memorable and special. Kawasaki Australasian Superbike Championship riders Sean Condon and Matt Walters each brought along their race Ninja ZX-10Rs and Mark McVeigh and Kevin Magee also took to the track on their MotoDNA Ninja motorcycles to give participants valuable riding tips.

Walters, Condon, McVeigh and Magee were joined on track by high-profile brothers Damian Cudlin and Alex Cudlin for a few special hot-laps. The sight of 6 green Ninja’s riding together so quickly around the Wakefield Park circuit was a special site for both participants and the 16 Kawasaki staff members in attendance.

Rozanna Henrikson rode down from the Gold Coast on board her Ninja 300 to take part in the event along with her sister, Sonya Karlsson who rode a Versys 650L. Rozanna was very impressed with the day, saying, “Sonya and I had an absolute ball and met so many awesome people. Riding the track was all new to me but I had lots of fun trying it. Anything that will make me a better rider is great and I can’t get over how nice and how helpful everybody was. Thanks Kawasaki.”

Kawasaki Team Green Australia member Mat, who attended the day with his Ninja ZX-10R said, “Thank you for putting on a great day. Everyone was amazing, with a smile on their face and ready to have a chat. It didn’t just feel like a plain old ride day, or even an event…it felt like something much bigger. For the inaugural event it was a cracker, and I’m certain any future team green outings will eclipse what was a top day”.

Kawasaki thanks everybody who made the first Kawasaki Team Green Australia event such a success including Australian Road and Track Riders Promotions Group who ran the event . The next scheduled low cost track ride day will take place at Winton Raceway in Victoria in October. Stay tuned for more details.