The motorcycle industry is a vital contributor to the national economy, contributing $3.6 billion per year. In fact, per capita, Australia is the largest off-road market in the world.

Peter Richardson, a touring bike enthusiast, could see the potential in tapping into the motorcycle tourism market and approached Ballina Shire Council with the idea of developing a motorcycle touring guide to entice riders to the Ballina Coast & Hinterland.

“My wife Nita and I are members of a local motorcycle group and we often ride throughout NSW and interstate. It’s not unusual to spend up to $330 a day on accommodation, food, fuel, parts, repairs and some retail therapy. So imagine how much an entire touring group would inject into a local economy,” said Peter.

“We have so much to offer in here that our local touring group thought, why don’t we tap into the motorcycle market and sell the benefits of our region? We have great rides, beautiful scenery, quality accommodation, food and retail outlets, plus it would be good for the local economy.”

The Ballina Base Motorcycle Guide includes eighteen touring and enduro rides that stretch north to Nerang, south to Grafton and west to Tenterfield. With all the suggested rides bringing the rider back to base in beautiful Ballina. The Guide has been produced to marry with the Ballina Coast & Hinterland brand and the visitor guide that promotes it.

“I don’t own a motel, coffee shop, tourist attraction or motorcycle shop; I’m a plumber and this is my way of giving something back to the town I love.”

Australian Motorcyclist Magazine (AMM) has also got behind the guide offering content advice, photos and an editorial column from Peter ‘The Bear’ Thoeming and will distribute 4,000 copies along parts of the East Coast in an upcoming issue of the magazine. The remaining guides will be delivered to local motorcycle clubs and retailers, and throughout the Visitor Information Centre network in NSW and interstate

HEMA Maps has contributed the road map, with a selection of photos provided courtesy of motorcycle photographer Mark Hinchliffe. Council engaged the North Coast Ad Agency to produce the guide and Ballina’s Quality Plus to print 10,000 copies.

On their annual Ballina Raid in September, the 2WheelBabes also gave the idea the thumbs up and provided a group photo of their all-female membership on the Shaws Bay foreshore.

The Ballina Base Motorcycle Guide can be collected from the Ballina Visitor Information Centre at 6 River Street or downloaded from www.discoverballina.com 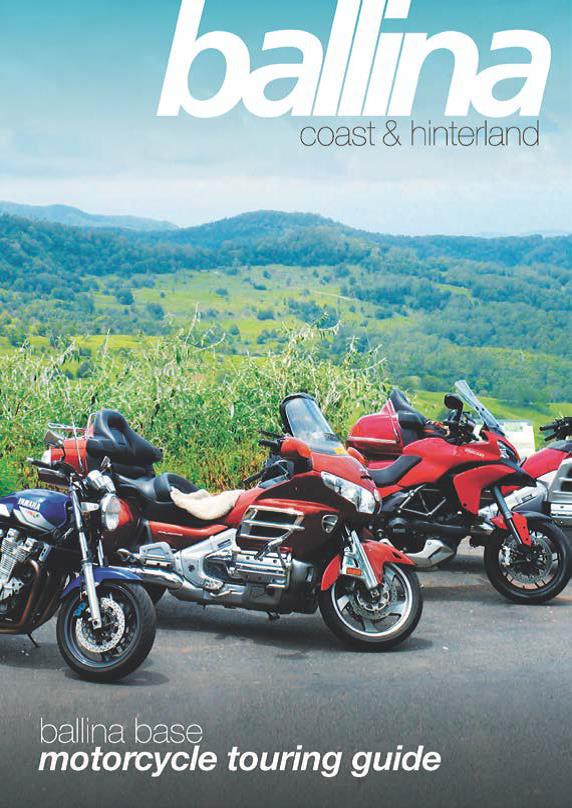