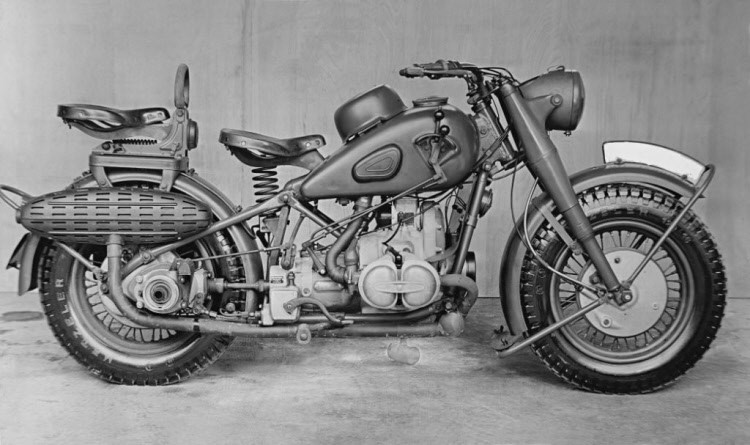 BMW and the armed forces

From the moment the first official BMW motorcycle – the 1923 R 32 – went on sale, the German company swiftly gained fame for its reliable, powerful and practical machines, and its growth subsequently accelerated. In fact, it wasn’t until the early 1930s, following in the wake of the American stock market collapse in 1929, that BMW’s proprietary business floundered. But while BMW could diversify into aero engine production and ride the reduced demand for motorcycles, many thousands of German businesses were lost to the huge aftershock of the American Great Depression.

BMW’s business also floundered but was then unexpectedly bolstered by the changes in the country’s leadership and its insistence of remobilising its armed forces. With the Treaty of Versailles in place following WWI, the German armed forces were restricted in what military vehicles could be used. Motorcycle production had been in its infancy at the time of the Treaty and wasn’t effectively banned from military use. There then followed purchase orders from the military for BMW motorcycles to serve as transport for its Wehrmacht (armed forces). Such contracts meant that although profit margin was small, BMW could, with exceptional management, weather the growing financial storm.

In 1932, BMW introduced the R 4 that went on to become known as the R 4 Series 1. The R 4 was a single-cylinder machine of 398cc based on the usual bore/stroke format of 84 x 78mm. It wasn’t a success as such, but then the buying public had no spare funds for such luxuries as a motorcycle. The 1933 R 4 Series 2 sold slightly better with a recorded 1,737 units being made. The most notable aspect of this machine was the upgrade and first use of a four-speed gearbox.

Come 1934 and the Series 3 version of the R 4 received some more important engine changes and peak power output shifted from 12HP to 14HP. This increase, along with the four-speed gearbox, saw a serious purchase with the Wehrmacht, the German armed forces that were growing in numbers daily. Production of Series 3 topped 3,671 and the following year’s Series 4 figure was similar at 3,651. But it was between 1936 and 1937 – the first years of Wehrmacht conscription – that saw the majority of the 5,033 R 4 Series 5 supplied for military use.

With a running weight of just 137kg and a top speed of 62mph, the R4 series 5 was a good choice for service use. It was light, agile, fast and totally reliable. As had been proven with off-road competition use, the front suspension of plate spring and a strong pressed steel frame meant the R 4 could cope with field duties. It was also a perfect candidate for mounted sidecar use with just a change in the final drive gear ratio to accommodate platforms or sidecar units. The Wehrmacht was now achieving its aim of fully mobilised platoons, something much, much more effective than the cavalry divisions of WW1.

But even though the R4 model series was proving to be an exemplary machine it was replaced in 1937 with the R 35, a machine geared specifically for Wehrmacht use. This motorcycle was exceptional in the way it performed. The engine produced the same 14HP as the last R 4 model but engine capacity had been reduced by 56cc to 342cc compared to the R 4’s 398cc. A new SUM carburettor and 6.0:1 compression helped here and also went part way to achieving the 62mph top speed and creditable fuel usage figure of 94mpg (3.1 litres/100 km). The fitment of sprung telescopic front forks also meant the R 35 could achieve swifter coverage of field duties. Sidecar fitment was also a requirement, which the R 35 coped with very well.

Another BMW model that was destined for Wermacht use was the 1938-41 R 71. This beautiful example of BMW motorcycle design was a useful addition to military duty because of its ability to be ridden solo or with sidecar use direct from the factory. Large block off-road tyres were standard fitment as was the hydraulically damped telescopic front forks and ‘plunger’ rear suspension. The side-valve flat-twin ‘Boxer’ engine had a large capacity of 745cc from a very square bore and stroke measuring 78 x 78mm, and produced 22HP. Its robust design was accentuated with the use of a fully-welded tubular steel frame that easily coped with sidecar fitment – again all that was required to make sidecar and motorcycle truly compatible was a change in the rear wheel ratio with reduction in the bevel drive teeth.

A simplified fuel supply system of two Graetzin G24 carbs and a lowly 5.5;1 compression ratio gave the R 71 a wide spread of torque that could get it up and down the roughest ground – and pull a hefty 210kg in weight, or 500kg total including sidecar. The use of a foot gear-change system aided rider concentration for the way ahead.

The R 71 proved to be so effective that the US army made a point of ‘capturing’ an R 71 in order for Harley-Davidson to clone it. At the time Harley-Davidson hadn’t time to devise a shaft final drive system for its traditional V-twin engines; it also had problems with the rear cylinder of the V-twin overheating in warmer climates, whereas the Boxer engine’s cylinders projected out into fresh air and had the best effect of air-cooling. By the time Harley-Davidson had figured out metric to imperial conversions to reverse build a copy, the prototypes (OHV and SV) were considered to be too late for wartime activity – in truth, the creditable success of the go-anywhere Jeep consigned the 750 XA bikes to special projects and eventually private and museum ownership.

Leading up and into WWII many other classes of BMW motorcycles were purchased for Wehrmacht use. The R 12 became a long-running production machine because of the Wehrmacht. Between 1935 and 1942, recorded production of single and twin-carburetted R 12 motorcycles exceeded 36,000 units. This is an incredible figure when you consider the other classes of machine built by BMW in the same time period. Suffice to say that the majority of BMW bikes produced between 1934 and 1940, such as R 61 etc, were at some point put to Wehrmacht use.

There were, however, many other BMW motorcycles used by the Wehrmacht that were not officially purchased. The need for experienced motorcyclists was a large key in strategic mobilisation of mechanised Wehrmacht forces. For this reason many BMW motorcycles, regardless of type or capacity, were levered into active duty with their owners at their time of conscription. Motorcycles of opposing forces were often seized in conflict and used as cheap and very welcome transport; as well as trophies for personnel who had a passion for motorcycles.

Among all the BMW motorcycles that were actively used, there is one bike that is associated solely with the Wehrmacht and wartime operations.

In 1940, at the request of the Wehrmacht along with heavy influence from Germany’s ruling body, a new BMW motorcycle was called for. This motorcycle was to be designed specifically with sidecar attachment but some bare examples would be required. But the ultimate challenge laid down by the Wehrmacht was that both machines should be able to cope with deployment in all theatres of war and in any part of the world. Several prototype models were built with the existing R 71 engine as the power unit but the end result was an engine built specifically for the required purpose. It wasn’t long before model R 75 was born.

The R75’s Boxer engine featured the same bore and stroke as the R 71 to give 745cc and ran with two Graetzin carbs (Sa 24/1, Sa 24/2). Output from the OHV (overhead valve) type 275/2 engine was claimed to be 26HP at 4,000rpm. What set the R 75 apart from all other BMW motorcycles of the time was the use of a dual gear system to make use of the four-speed gearbox for road and off-road. The gears could be swapped by foot or hand shift, and there was another hand shift lever to select road and off-road ratios. In total there were five road gears (4 forward, 1 reverse) and four off-road gears (3 forward, 1 reverse). Rigorous testing showed there weren’t a lot of areas the R 75 couldn’t manage to cover. But BMW had another trick up its sleeve to ensure an R 75 sidecar outfit could also traverse the same landscape in all weathers.

The third wheel supporting the R 75 sidecar unit was also a driving wheel. A geared take-off point at the rear bevel drive box featured a differential that supplied drive, via a Cardan shaft, to the sidecar wheel and provided an effective form of two-wheel drive in difficult conditions. The sidecar wheel also featured the same 250mm hub brake as the front and rear bike wheels and all three were interchangeable with each other – the reason why only one spare wheel was necessary to keep mobile. Interestingly, the sidecar braking system was hydraulically actuated.

The first batches of R 75 sidecar units were built in Munich and released to the Wehrmacht in 1941. Very quickly, the R 75 became the motorcycle sidecar machine of choice. With a healthy weight-carrying capacity it became a multi-role machine and served particularly well in desert conditions where chain driven motorcycles were hampered by broken chains from the ingress of grit – the BMW Cardan final drive shaft wasn’t prone to this. BMW was also quick to fit rubber tele-gaiters to the telescopic front forks to prevent sand damage.

With the need for urgent supply of motorcycles and aero engines, most R 75 production was shipped to other production lines outside of Munich, but most of the estimated 18,000 bikes built in the three year period of 1941-1944 were from the production lines of the Eisenach factory in Thuringia.