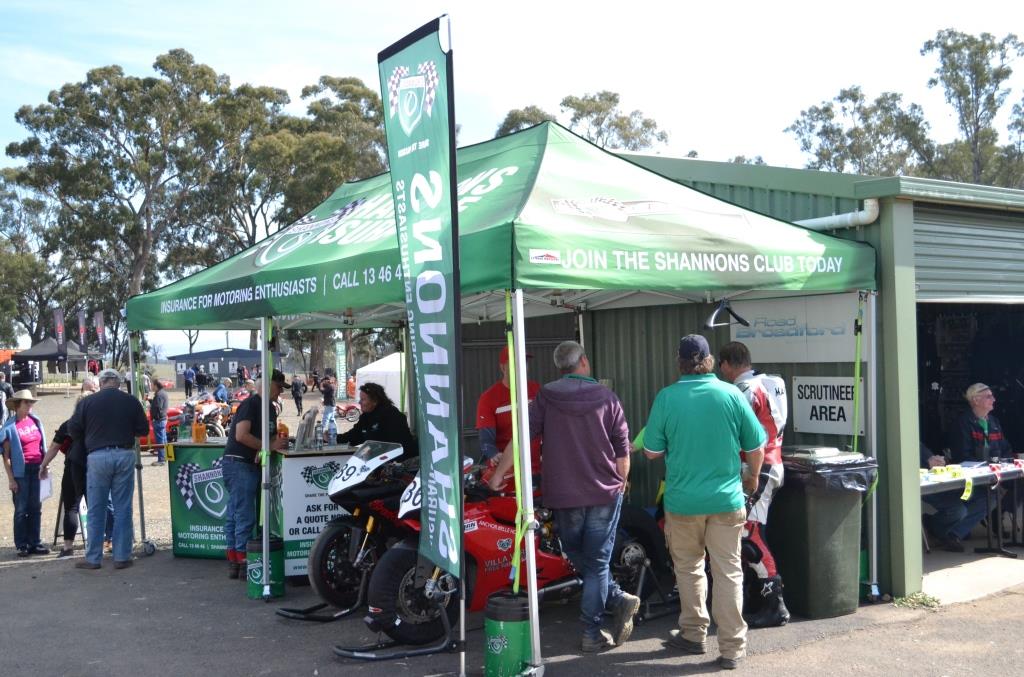 The Easter long weekend played host to numerous two and three wheeled events across the nation, from Speedway, Road Race, Motocross and Enduro. However, there was only one event that hosted all of these disciplines in classic and vintage non-competitive form. Featuring on-track displays, swap meets, star-studded dinners, static motorcycle displays, camping and so much more, the 2017 Shannons Insurance Broadford Bike Bonanza (SIBBB) once again lived up to its well-deserved reputation at the State Motorcycle Sports Complex, Broadford, VIC as being an annual pilgrimage not to be missed.

Motorcycling Australia (Acting) President, Peter Goddard has been a participant of several ‘Bonanza’s’ over the years and admits that it is one of his favourite events on the calendar. This year’s SIBBB was certainly not one he was willing to miss. Peter commented;

“This event has proven to be exceptional, with an incredible and rich history not only of Australian motorcyclists and their motorcycles, but of Motorcycling Australia itself. With all the familiar machines and faces, it is like waking up thirty years ago!” He quipped.

“Some of the bikes here, not only on track or in the pit garages, but next to patron’s tents and trailers at campsites dotted around the complex were incredible. The Bonanza has a strong following nation-wide, and will only grow larger and stronger as the years go on.

“It is so important for us to have a company like Shannons involved because they are deeply involved in grass roots recreational motorcycling, as are the majority of our members. This is an event centred around recreational riding and magnificent classic motorcycles, meeting and honouring our legends. Shannons are very supportive of people that have strong emotional connections to their toys. That’s exactly what we are about too. Shannons Insurance have been a huge support for the event and Motorcycling Australia.” Goddard finished.

Shannons Melbourne Business Development Manager, Belinda Douglas was present through the duration of the SIBBB and shared her passion and commitment, adding; “In our eyes, the Bonanza gets bigger and better each year. The highlight of the event for us would have been seeing all the historic bikes both on and off tracks, but the ‘Ducati All Stars’ on track proved to be a hit all weekend, and it was amazing to see the rapid pace of the Ducati Superbikes on track!

“Because we support many classic events nation-wide, there are always familiar faces and some are just like long lost friends when we do bump into them again. Almost as if it’s an annual reunion! Its not just the people that are familiar, the vehicles are also like long lost friends. Be it car or bike, a vehicle may change hands, but the present owners still insure it with Shannons and display it at the events we go to.

“Shannons was founded in the early 1970s, by the late Robert Shannon who was a classic car enthusiast that was fed up with mainstream insurance companies not being able to insure his rare vehicles. He decided he had to do something about it and the company has evolved into that we all know today. To be employed by Shannons, you must be an enthusiast – its a prerequisite. The beauty of that is, it continues that very same passion Robert started with, and nothing has changed since the 70s. This means that anyone you speak to at Shannons is either a car or a bike enthusiast, and knows what they are talking about and who they are talking to.” Belinda continued.

“There’s a lot of people with rare and classic vehicles under blankets, tucked away in sheds everywhere that understandably don’t really want anyone to know they have them. It’s up to us to start the conversation with those people and Shannons Insurance being present at events like the Bonanza is a great way for us to start that dialogue with collectors and owners. It might take one, two, three, up to seven or eight events for us to gain the trust of the customer, or to get them to a comfortable level to have the discussion about how Shannons can help them. Usually, once they do decide to insure their prized collection or vehicle, the piece of mind they have is like a huge weight lifted from their shoulders.

“At the 2017 Bonanza last weekend, we did receive a lot of walk-ups to the Shannons display, mostly by people who’s friends have told them about their experience with Shannons. There’s a lot of trust involved and a lot of sensitive information that people entrust to us, but that discretion is what Shannons is renowned for.

“From our point of view, all the effort that Motorcycling Australia and Motorcycling Victoria are going to lately across the motorcycling community, is such a great fit for Shannons and we feel that partnerships as this one (Bonanza) are mutually beneficial. It’s the direction we all want to keep going in.” Shannons Melbourne Business Development Manager finished.

2017 SIBBB Event Coordinator, Rachelle Wilkinson was thrilled with the running of the event, commenting; “The partnership between Shannons and Motorcycling Australia is a great fit in this instance, as they both share a passion for classic motorcycles and the rich history of Australian motorcycling sport. They have been integral in making the event as fantastic as it is. It was great to have Shannons Insurance with us all weekend, with people of all ages walking around in the sunshine with smiles from ear to ear. It was more than just riding and bikes.. It’s the whole atmosphere that simply needs to be experienced to be believed and Shannons understands that.” Wilkinson surmised.